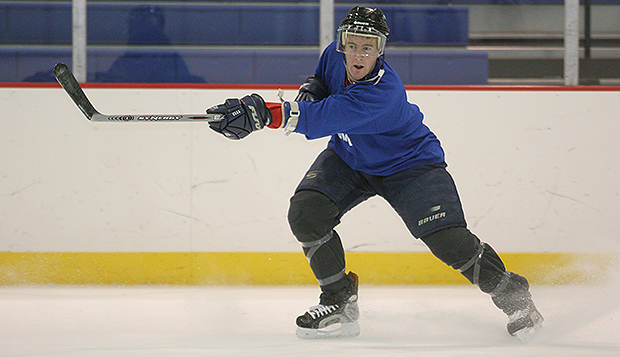 Jeff Lowes plays in a Liberty men's hockey alumni game at the LaHaye Ice Center in 2006, when he was an assistant coach.

Liberty played in the ACCHL from 1996-97 through 2001-02, with Handy, now in his 19th season at the helm, serving as the Flames' head coach for the last two seasons in the league.

ACCHL Commissioner Mike Walley said Lowes was on all six ballots cast by the ACCHL Hall of Fame board when it met last month to determine the new inductees and he received 16 of a possible 18 points in the voting.

Lowes, a native of Peterborough, Ontario served as Liberty's team captain twice and earned Forward of the Year honors and was named to the ACCHL First Team twice.

"Jeff was a big part of our team," said Handy, who was instrumental in bringing the fellow Canadian to campus. "When he came in, it was kind of a new era of Liberty Hockey and he was a big part of taking our program to the next level."

He was joined by his younger brother, defenseman Chris Lowes, for his last three seasons playing for the Flames.

"That was one of the biggest highlights of my career, getting to play three years with Chris, because, being two years apart, we never got to play together growing up," Jeff Lowes said. "Kirk was one of our very strong players and was obviously a leader. The relationships that I developed in those four years, to this day, are still some of my best friends and mentors."

Chris Lowes took the DII men's hockey coaching reins from Handy when the DI team started in 2006 before replacing Bloomfield as DI women's head coach last year. Jeff Lowes, meanwhile, served as a DI and DII assistant coach to Handy from 2005-12. In his first year of coaching, the Flames made it to the DII national championship game.

An Associate Professor in Liberty's Exercise Science Department, Lowes started practicing as a chiropractor when he moved back to Lynchburg to join Handy's coaching staff 14 years ago. He opened a new office, the Virginia Sport & Spine Institute, in 2018.

He is also a chiropractor on Liberty's Athletics department's sports medicine staff and has the opportunity to work with several Club Sports athletes. When he was an assistant coach, he would occasionally pull double duty as the team's athletic trainer on road trips.

As a player, Lowes most fondly remembers traveling to the Roanoke Civic Center for home games and Charlottesville for showdowns with ACCHL rival Virginia.

"It was always a fun time to play them, especially in their rink up in Charlottesville, where I played the very first game of my college career," Lowes said. "And playing at Roanoke, where we had really good crowds, it was great seeing the support of the school, even having to drive an hour to get there.

"Every year the Liberty program continues to keep growing and improving," Lowes said. "The biggest difference was the caliber of competition and the depth now is huge compared to back then."