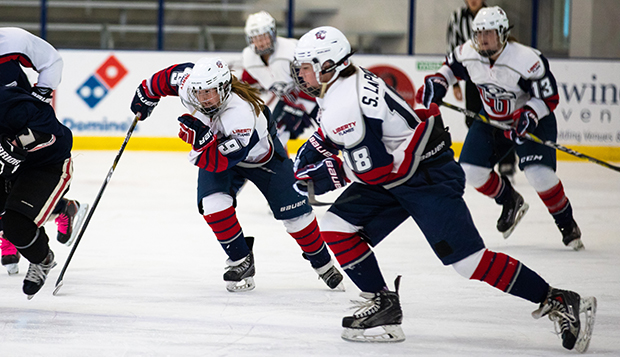 The Lady Flames (10-4-1) opened a 2-0 lead on the Bulls in Friday's opener on goals by graduate forward Catharine Burrell with 2:04 left in the first period and senior forward Chelsea Greenwood with 12:16 left in the second, both assisted by freshman forward Madeleine Niederer. Buffalo rallied to tie the game on two goals by Madeleine Norton in the third.

Against SUNY Oswego, freshman forward Paige Arnosti netted a hat trick, including two unassisted goals in the first period, and Burrell added two goals assisted by Greenwood to start the second- and third-period scoring. The Lady Flames outshot the Lakers, 59-23, and got single goals from sophomore forward Brittany Hegele, junior defenseman Holly Turner, and freshman forward Kiana Zeigler, her first of the season.

Sunday's showdown with Mercyhurst was tied at 3 after the first period before Bridget Bork's second goal midway through the second proved to be the game-winner. Burrell started the scoring before freshman forward Hope Stengler gave Liberty a 2-1 lead with her first goal of the year and Greenwood retied the contest with 3:22 left in the opening stanza. Both teams took 29 shots and Hutton made 25 saves.

Those will be the final three games factored into Liberty's CHE East Region ranking to be released the first week of March, with the top six teams qualifying for the March 27-31 ACHA DII women's National Championships near Dallas.

"These showcases help prepare us for nationals where we could be playing up to five games back to back," Lady Flames Assistant Coach Rena Leone said. "Our endurance is definitely improving."

As the top team in the South Division, the Lady Flames will compete with Buffalo, Delaware, and Mercyhurst in the CHE East Region Tournament, March 16-17 in Johnstown, Pa., a final tune-up for nationals.