Lady Flames make case for No. 1 with 8-2 rout of Bulldogs 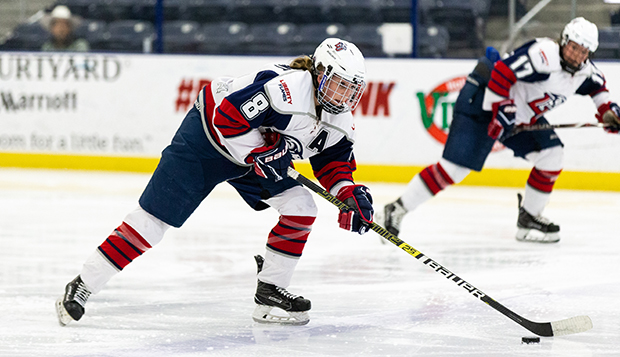 Liberty University's ACHA Division I women's hockey team showcased its volatile attack by completing a sweep of top-ranked Adrian with an 8-2 victory on Saturday afternoon at the LaHaye Ice Center.

Just over 12 hours after rallying for a thrilling 5-4 win in Friday's late opener, the second-ranked Lady Flames (24-1-3) got two goals apiece from junior forward Alex Smibert and sophomore forwards Shelby Bradford and Shannon Fehr in the lopsided rematch with the Bulldogs (20-3-1).

"Our girls made the most of our chances and we have games like that where our offense just really seems to execute," Liberty Head Coach Chris Lowes said. "We spend quite a bit of time working on it and making sure we are firing on all cylinders. It's super encouraging and a good way to finish the regular season."

The Lady Flames will find out this week if they overtake Adrian as the No. 1 team in the national rankings prior to starting their ACHA DI National Championship defense, March 27-31 near Dallas. Liberty defeated the Bulldogs, 2-1, in last year's final.

With 15:12 left in Saturday's first period, Liberty seized an early 1-0 lead when freshman forward Grace Machholz stole the puck in the Bulldogs' defensive zone and left it for sophomore forward Danica Polson, who lifted a wrist shot through the slot past Adrian goalie Dana Colombo.

Three goals over a span of 24 seconds — the first and third by the Bulldogs — tied the contest at 2 with 10:39 to go. Adrian netted its first equalizer on a crossing pass from Kaillie Hardy to right wing Nicole Paradis who redirected it inside the right post at the 11:03 mark. Twelve seconds after the ensuing faceoff, Smibert sent a pass through the left side of the circle to Bradford who threaded her shot through the five hole.

But as quickly as the Lady Flames reclaimed the lead, Adrian tied it back up after winning a faceoff on the offensive end. Celina Clark flicked a backhand out of the right corner off the stick of Liberty junior goalie Nadia Rupoli inside the right post.

Three and a half minutes after that, the Lady Flames captured the lead for good when senior forward Lauren McDonald came to a skid stop and slid a cross-crease assist to Fehr, who punched the puck into the net for a 3-2 advantage with 7:06 to go.

Liberty doubled its lead to 4-2 with 1:46 left in the first period when Bradford skated across the left endline and sent a backhanded pass to Smibert in front, where she deflected the puck in from point-blank range after it flipped up into the air.

The Lady Flames stretched their advantage to 5-2 at the 13:44 mark of the second period after junior forward Vanessa DeMerchant gathered the rebound of graduate defenseman C.J. Tipping's shot from the top of the right circle. DeMerchant sent a backhanded assist from near the right post back to Bradford skating through the slot where she slammed it into the back of the net past Kalysta Coulter, Colombo's backup.

Just 20 seconds into the third period, DeMerchant extended Liberty's lead to 6-2 by pocketing a turnaround shot in the right circle through traffic. With 6:29 remaining in regulation, the Lady Flames cashed in for their seventh goal when Smibert scored on a turnaround putback in front.

Finally, with 2:14 to go, McDonald chased down a puck and skated behind the net before finding Fehr at the right post where she jammed it in with a second effort.

McDonald, Bradford, DeMerchant, and junior defenseman Dana McLeod will miss Liberty's final exhibition series next Saturday and Sunday against the Washington Pride U19 team in Rockville, Md., as they will be flying to Russia with their Team USA teammates to compete in the Winter World University Games.