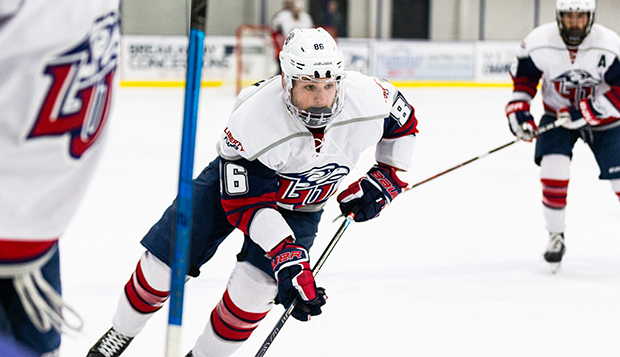 A hat trick by junior forward Brock Thompson helped Liberty University's ACHA Division I men's hockey team clinch defense of its ESCHL regular-season title and an autobid to the March 21-26 National Championships near Dallas with a 7-5 victory over Delaware, Friday night at the LaHaye Ice Center.

"It's a special thing when the guys battle their way into the national tournament," Flames Head Coach Kirk Handy said. "It shows they have worked consistently and have competed throughout the year. There's things we've got to clean up from tonight's effort to be better moving forward, but I'm real proud of our guys for achieving that goal."

Liberty (21-4-3, 15-1-3 ESCHL) outshot Delaware, 40-19, and held a 47-21 advantage in faceoffs. The Flames also killed off seven penalties, but they finished even with the Blue Hens (12-13, 3-11 ESCHL) in special teams scoring with three goals apiece — allowing two goals down five-on-three and one shorthanded score to Delaware.

In the final minute of the first period, the Flames capitalized on a five-on-three power play of their own to seize a 1-0 lead when sophomore forward Devin Pierce recovered a loose puck on the outside edge of the left circle and spotted Thompson wide-open in the left crease where he slammed the assist past Delaware goalie Christopher Ponticello.

Then, with Liberty still on a five-on-four advantage 20 seconds into the second period, Thompson struck again, this time sneaking behind the defense and firing a putback of junior linemate Quinn Ryan's shot from the top of the right circle past Ponticello.

Just over three minutes later, Delaware trimmed the deficit to 2-1 when Colin Emerich took advantage of a Liberty turnover in the defensive zone, slipping the puck inside the left post with 16:34 to play.

But the Flames responded for a third power-play goal a minute and a half after that on a give-and-go between junior defenseman Garrett Nelson and Thompson. Nelson dropped the puck back to Thompson on the outside of the right circle before skating behind the cage and receiving a return pass threaded through the Blue Hens' defense for a one-timed finish.

Officials reviewed video before awarding Liberty its fourth goal at the 13:30 mark. Senior forward Zak Hayes skated from the high slot into the left circle and lifted a backhander that touched off the upper netting inside the top right corner of the cage, extending the lead to 4-1.

With the teams skating four-on-four, Delaware cut the Flames' lead to 4-2 with 12:42 left in the period when Michael Nisky sent a short crossing pass to Chris Mazella who tapped the puck past junior goalie Cole Burack from point-blank range.

But the Flames stretched their edge to 5-2 at the 10:27 mark when sophomore forward Jordan Bochinski gathered the rebound of Nelson's shot along the back boards and flicked a quick wrist shot from behind the left post that bounced off Ponticello's back and across the goal line.

Hayes was in the right place at the right time to net his second goal with 3:53 left in the second, lifting the rebound of sophomore forward Ryan Cox's shot from the right side past Ponticello from out in front.

The Blue Hens pulled back within 6-3 by converting on a five-on-three opportunity with 52 seconds left in the period when Ethan Docking finished a short feed from Mazella in front.

Docking started the third-period scoring with a shorthanded goal before Mazella made it a one-goal game by capitalizing on another five-on-three with a shot from in the slot with 8:34 remaining in regulation, cutting it to 6-5.

Moments after killing off a penalty, Ryan waited patiently before sending an assist across the slot to Thompson, who completed his hat trick and gave the Flames an insurance score with 2:58 to go.

"That was a big goal," Thompson said. "They had a little comeback there after we got into some penalty trouble and we needed one at the end and Quinn made a great play and put it in a perfect spot."

The Flames will attempt to complete a home sweep on Saturday with the 7 p.m. rematch webcast live by LFSN. Tickets are $2 for fans bringing a new or gently used stuffed animal to toss onto the ice as a donation to Gleaning For The World's annual Teddy Bear Brigade. 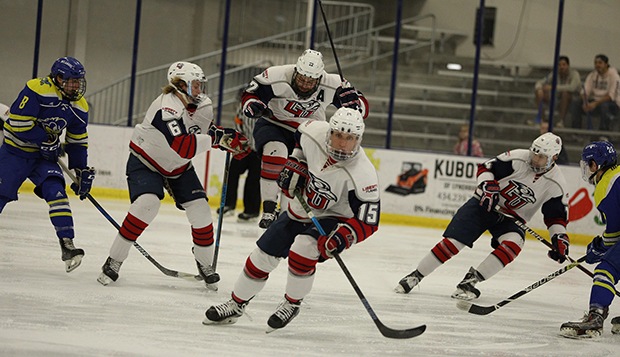