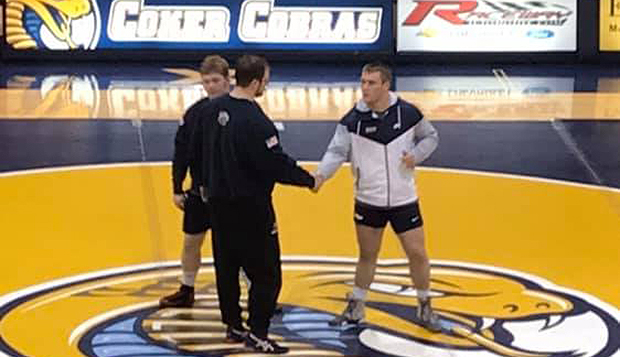 "We didn't wrestle well at all," Head Coach Jesse Castro said after the Flames fell to 11-3. "It was not a great representation of who we really are, but kudos to them, they outwrestled us."

It was senior night for Coker (3-11-1), which will host the NCAA Super Regionals next Saturday.

"They had a good following and they took us off guard," Castro said. "We looked at comparative scores and we weren't expecting that."

Just two and a half weeks after defending their NCWA National Duals championship near Las Vegas, the Flames (11-3) found themselves in an early 17-0 deficit and trailed 26-3 after Coker's Corey Christie scored a 4-3 overtime decision over Luke Ely at 165 pounds. That proved to be a pivotal match after Liberty strung together one pin (by junior Sam Karel over the Cobras' Grayson Spell at 174), two decisions, and one forfeit win over the match's final four bouts only to have its comeback bid come up five points short.

Sophomore Chad Cantrell (149) and senior captains Josh McIlhenny (184) and Dominick Johnson (285) recorded the Flames' three wins by decision. Because the match was held at Coker, there was no 235-pound weight class, which limited the number of bouts Liberty had to catch up.

The Flames have just over two weeks to prepare for the Mid-Atlantic Conference (MAC) tournament, set for March 2 in the LaHaye Multipurpose Center. Liberty has won the team title in each of the past seven seasons at that event, which serves as a qualifier for the March 14-16 NCWA Grand National Championships in Allen, Texas, which the Flames won for the second time last season.