Lady Flames shut out Rams twice with onslaught of shots 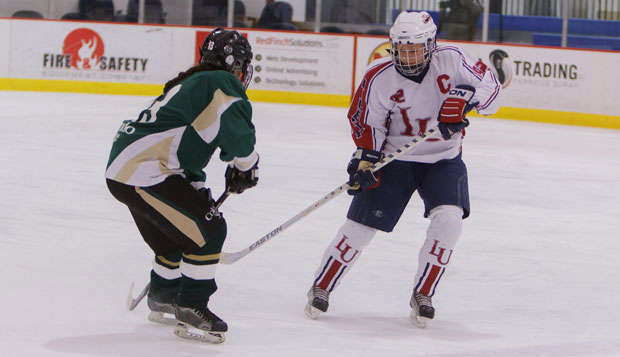 Two months to the day after completing a three-game sweep of visiting Colorado, Liberty University's Division I women's hockey team notched shutout victories in the first two games of a weekend series against Colorado State, Friday morning and evening at the LaHaye Ice Center.

The Lady Flames (20-2), ranked No. 1 in ACHA Division I, racked up 56 shots on goal in a 6-0 rout of the Rams (6-5) in the opener, with Kristina Toppazzini recording the shutout. Then in the nightcap, Liberty again dominated in the shot department, this time by a 57-9 count, but didn't have quite as much success getting the puck past CSU goalie Amanda Vandenberg in a 3-0 triumph.

"Their goalie's really, really strong," Lady Flames head coach Paul Bloomfield said. "We controlled the game in their end mostly and we rang three or four off the post. As often as they bounce out, they'll bounce in, but they didn't tonight."

"We definitely could have put a few more in tonight, but obviously, we were tired having already played this morning," added senior forward Laura Del Monte, who netted two of the Lady Flames' first three goals off assists from Carly Peleshok in the opener. "The first goal I scored bar-down, just like top shelf, and then the second goal I had a breakaway and I deked the goalie."

Del Monte netted the first two goals of the nightcap, first finishing a beautiful assist from Keeley Beisinger to start the scoring. Beisinger skated from the defensive end up the left wing and around the cage before finding Del Monte posting up in the right crease for a crisp one-time finish and a 1-0 edge.

"We work on those kind of drills all the time, so it's nice to see when you work on them that they actually happen in the game," Bloomfield said. "Those hook-arounds are nice if you can get them, but everybody's got to be in the right spot at the right time."

With 8:40 left in the second period, the Lady Flames went up 2-0 on a powerful slapshot launched from the top of the right circle by freshman defender Autumn Kucharczyk that Del Monte deflected past Vandenberg.

"I was just kind of in front of the net and I saw the shot coming so I just put my stick out and just tipped it in," said Del Monte, who benefited from bonus ice time due to injuries to a few of her teammates. "I was actually playing defense in the previous games, so they put me up front this weekend, back on forward. It's nice to be able to get some goals in my last games at Liberty, so I'm excited about that."

"She worked hard today and we had her on a stronger line today," Bloomfield added. "When you get somebody like that that you can kind of stack the lines a little bit, it pays off."

Finally, with 12:28 left in the third, freshman center Carrie Jickling received a pass from Stacey McCombe in the right corner and her shot from deep in the right circle skimmed under Vandenberg for the final score. Sophomore goalie Samantha Rupp posted the shutout with solid support from the Lady Flames' defenders and attack, which kept the puck on the Rams' side of the ice most of the night.

"Our forwards were coming back and helping our defense out and you can do that against a little weaker team because you've got more freedom," Bloomfield said. "It was a good game today."

Liberty and CSU will face off for the third and final time Saturday night at 8:45. It is the Lady Flames' final game against an ACHA opponent as they seek to build momentum for the national tournament set for March 6-10 in Ashburn, Va.

"We've definitely come together as a team and we're at the point where we know each other really well so we're getting more chemistry on the ice," Del Monte said.