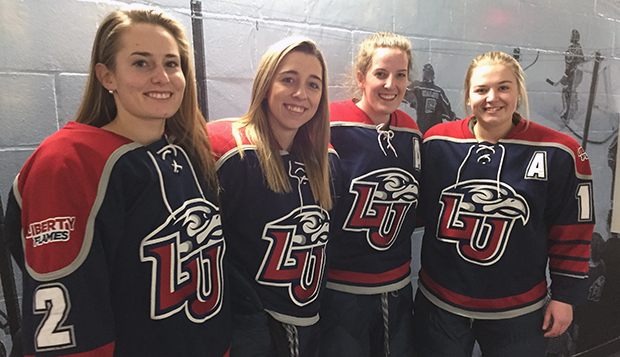 Four members of this season's Liberty University's ACHA Division I women's hockey team will travel with Team USA to Krasnoyarsk, Russia, for the 29th biennial Winter World University Games from March 1-11. Before this year, the Lady Flames had never had a player selected to compete in the event, an 11-sport festival similar to the Winter Olympics.

Senior forward Lauren McDonald, who ranks fourth in ACHA Division I in scoring with 13 goals and 26 assists, junior forward Vanessa DeMerchant, junior defenseman Dana McLeod, and sophomore forward Shelby Bradford all were chosen to the 24-player Team USA roster from the 23 teams in ACHA Division I.

"It's super exciting and something we never expected would happen," McLeod added.

They will experience "Real Winter" in the heart of Siberia.

"It's going to be amazing to go to Russia and I'm excited," Bradford said. "It's going to be cold, but I think we'll handle it just fine. It's definitely a once-in-a-lifetime opportunity to play for your country and represent the place where you're from playing the game we love."

The four Liberty players have competed against the majority of their 20 Team USA teammates, including three from Miami (Ohio) University, who they met when the Lady Flames traveled to Oxford, Ohio, Jan. 18-19.

"There's girls from all over the United States and we play against a lot of them, so it'll be a great experience," Bradford said. "We're going there early to get to know the girls and get some skates together."

The complete roster is available on the USA Hockey website.

The four Lady Flames will fly out of New York on Feb. 24 with their new teammates.

"It is going to be a great cultural experience and good exposure that may open doors for them," Lowes said. "It is something they will remember forever and it will be exciting for us to be able to watch and cheer them on."

The only games they will miss at Liberty are the final two exhibitions of the season against the Washington Pride U19 team on March 2-3. They will return to Liberty in plenty of time for the Lady Flames to prepare to defend their ACHA DI National Championship from March 27-31 near Dallas.

"It'll be a quick learning curve and turnaround, playing with top-level players from around the world," Lowes said. "They'll come back and hopefully be motivated and have a bit of confidence from playing at that level and be able to bring that to our team."

Team USA will play preliminary matchups against Japan on March 1, Switzerland on March 3, Canada on March 4, Russia on March 6, and China on March 8, followed by semifinals on March 10 and championship and consolation finals on March 11 at the Pervomaisky Ice Arena.

In four previous appearances, Team USA has never captured a gold or silver medal — placing fourth in Turkey in 2011, fifth in Italy in 2013, fifth in Spain in 2015, and third, earning a bronze medal, in Kazakhstan in 2017.

"Generally, Russia and Team Canada are the heavyweights," Lowes said. "It'll be super competitive and a great experience, a chance to represent their country against the rest of the world in their sport."