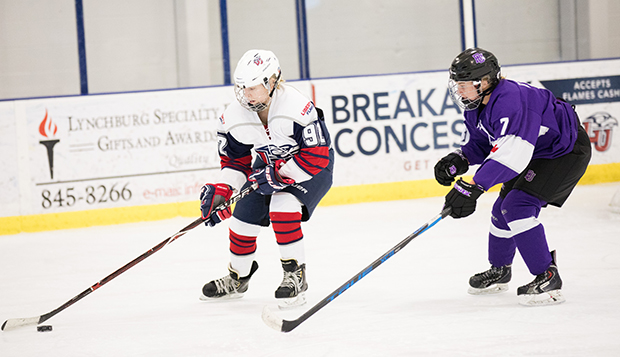 "We were probably in their end 70-75 percent of the game," Lady Flames Assistant Coach Rena Leone said. "We were rolling through our four forward lines and two defensive pairings and they all played very well together."

In Saturday's opener, Liberty outshot Pittsburg by a 62-16 count and scored four unanswered goals in the second period to expand its lead to 6-1.

Less than a minute after the Lady Panthers seized a 1-0 lead, Paige Arnosti netted the tying goal off an assist from fellow freshman forward Hope Stengler with 3:01 left in the first period. Then, at the 1:14 mark, Sarah LaPorte gave Liberty its first lead off feeds from senior forward Chelsey Greenwood and graduate forward Catharine Burrell, the team's top two scorers.

Greenwood iced the victory in the final seven seconds of regulation off assists from freshman forward Madeleine Niederer and Burrell.

Sunday's rematch was equally physical and considerably more competitive as Liberty only outshot Pittsburgh by a 34-19 count and senior goalie Kelly Hutton made 18 saves, allowing just one goal for the second straight game.

Greenwood started the scoring with 11:15 left in the first period, set up by Burrell and Niederer, before Rice lifted the Lady Flames to a 2-0 lead off an assist from Arnosti with 1:25 to go. Less than four minutes into the second period, Greenwood scored again off another assist from Burrell. Pittsburgh ended Hutton's shutout bid with 5:51 to play in the third.

The Lady Flames (8-2, 4-0 CHE South) clinched first place in the CHE South regular-season standings and will travel to the CHE Playoffs March 16-17 in Johnstown, Pa. First, on Feb. 15-17, Liberty will travel to Erie, Pa., to face Buffalo, SUNY Oswego, and host Mercyhurst, respectively.

"Buffalo is our best competition in the CHE," Leone said, noting that the Bulls currently lead Mercyhurst in the CHE North standings. "They're the team to beat."

Liberty is the No. 10 team in the East Region rankings, with a new computer ranking set to be released on Thursday. In order to qualify for a second consecutive bid to the ACHA Division II National Championships, set for March 27-31 near Dallas, the Lady Flames must move into the top six by the final ranking, following their final three regular-season games — Feb. 22-24 at home against Delaware, Navy, and West Chester.