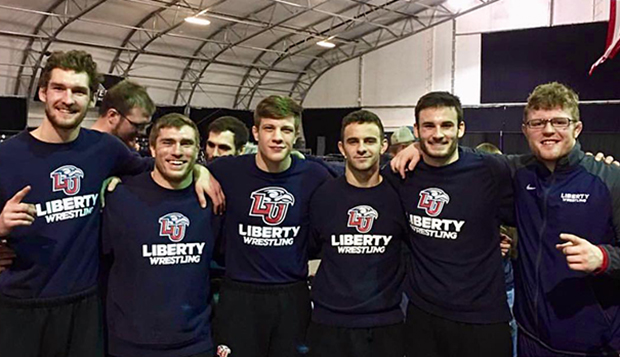 Cantrell racked up four wins before dropping a 3-2 decision to Pittsburgh-Johnston's Nathan Smith, 3-2, in the final. He opened the tournament by scoring a 7-3 decision over Pennsylvania's Jeremy Ridge before earning a 13-4 major decision over Franklin & Marshall's Sean Coakley, and 10-3 decisions over York's Timothy Sparks and Franklin's Mark Salvatore in the semifinals.

Amos, the tournament's top seed who went 3-1 on the day, began his march to the final with an 8-2 decision over Pennsylvania's Tyler Hall. He then shut out Pittsburgh-Bradford's Mitch Dowd, 11-0, for a second-round major decision and American's Abraham Correa-Medina, 2-0, in the semifinals to set up a showdown with second-seeded Eldar Muradov, who was not attached to any university. Amos, the reigning 235-pound NCWA national champion, fell by 11-7 decision in the final.

There was not a 235-pound weight class in the Messiah Open, since it involved primarily NCAA programs. So Liberty sophomore Jeffrey Allen competed in the heavyweight bracket and advanced to the consolation final before settling for fourth place.

Allen opened the tournament by scoring an 18-3 technical fall over Muhlenberg's Sam Rothstein before defeating Maryland's Parker Robinson, 9-4. He was sent to the consolation bracket with a 4-2 loss to Drexel's top-seeded Sean O'Malley. There, he faced senior teammate Dominick Johnson in his first consolation match, earning a 3-2 decision, before concluding his day with 5-2 and 3-2 decisions over Pittsburgh-Bradford's Sam Colebert and Millersville's Caleb Warner, respectively, forfeiting his third-place bout to Millersville's Josh Walls.

Like Allen, Johnson started competition with an 18-3 technical fall, over East Stroudsburg's Brandon Vigo. He then dropped a 3-1 decision to Walls. Johnson pinned his first two consolation opponents — East Stroudsburg's Burak Ozbay in 29 seconds and Drexel's Micah Watson in 4:40 — before being eliminated by Allen.

The Flames will next travel to South Carolina for a dual meet against Coker College on Feb. 14 before hosting the Mid-Atlantic Conference championships on March 2, when they will try to extend their seven-year tournament winning streak.