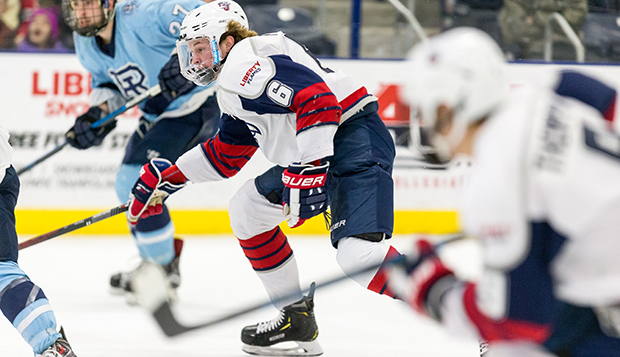 Playing without seven of the 15 forwards on its roster, Liberty University's ACHA Division I men's hockey team leaned on its defensemen to bolster the attack in a 6-5 overtime victory over ESCHL rival Rhode Island, Saturday night at the Brad Boss Ice Arena.

Nelson, who scored his first goal of the season in last weekend's home sweep of Rochester (Mich.), received passes from junior forwards Quinn Ryan and Josh Hamilton, skated through the high slot and ripped a shot into the back of the net to allow the Flames (20-4-3, 14-1-3 ESCHL) to salvage a series split with the Rams (17-10-3, 6-8 ESCHL) in the second straight contest decided in overtime.

"It was a real gutsy effort on our guys' part," Liberty Head Coach Kirk Handy said. "We were down to eight forwards late in the game and had to juggle things around and work our way through some less than ideal situations. With a short bench, they could have folded up shop, but they battled through the adversity. I'm really proud of their efforts tonight."

"It was another back-and-forth game," Handy said. "Our D had to step up and jump into play for us tonight and they did a solid job and we found a way to win."

Liberty held a 45-23 advantage in faceoffs and outshot Rhode Island, 51-33, with senior goalie Cole Burack making 28 saves, including a game-saving stop in overtime.

"They had a great opportunity and Cole made a spectacular save," Handy said.

The Flames needed just two minutes after the first-period faceoff to get on the scoreboard when junior defenseman Chaydan Lauber netted his fifth goal of the season and third in three games, for an early 1-0 advantage.

After Rhode Island scored on an odd-man rush, Thompson boosted Liberty to a 2-1 lead with 1:30 left in the first period before junior defenseman Jacob Fricks put Liberty back on top, 3-2, midway through the second period, moments after emerging from the penalty box.

The Flames built a 4-2 advantage with 3:10 to play in the second period when captain Josh Hamilton fired a spectacular shot into the top corner of the cage off an assist from fellow junior forward Quinn Ryan.

Liberty will have a chance to rehabilitate its injuries next weekend before concluding its regular season with three consecutive home series, starting with its final ESCHL series against Delaware on Feb. 15-16 at the LaHaye Ice Center.