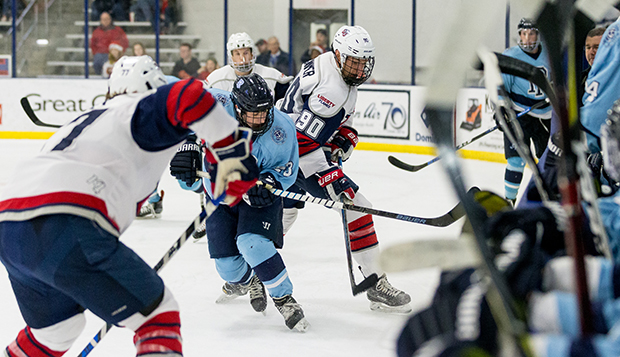 Sophomore forward Cole Gammer ended a scoreless stalemate in the seventh minute of the second period, skating through Rhode Island defense and firing the puck past goalie John Ketzenberger to give the ninth-ranked Flames (19-4-3, 13-1-3 ESCHL) a 1-0 edge.

But the 23rd-ranked Rams (17-10-2, 6-7 ESCHL) immediately drew a penalty and forward Patrick Creamer responded quickly by sneaking a power-play goal by Liberty senior goalie Cole Burack, tying the game at 1-1 moments before its midpoint.

Then, just five minutes into the third period, forward Griffin Long gave Rhode Island its first lead, 2-1, with another high-precision shot that caught the Flames off guard.

Gammer got the Flames back in the game by capitalizing on a power play with a top-shelf finish to level the score at 2-2 with 8:07 remaining in regulation before the Rams reclaimed the lead at the 5:24 mark on a shot from the point deflected past Burack by forward John Alsfeld.

However, the Flames regained a sense of urgency and retied the contest at 3-3 just over a minute later when sophomore forward Jordan Bochinski tipped in junior defenseman Matt Cruickshank's blast from the point. The game remained tied for the final 4:08 of the third period, sending it into sudden-death overtime.

Liberty had a golden opportunity to put the Rams away when junior forward Quinn Ryan drew a penalty on a breakaway 24 seconds into the five-minute extra period. The Flames' leading scorer had his penalty shot rejected, however, and the Rams took advantage, converting the game-winner off the stick of forward Jake Salisbury with 2:47 to go.

"We have to be a lot better (Saturday)," Liberty Head Coach Kirk Handy said. "We definitely didn't have our ‘A' game tonight, so we need to figure it out, hit the reset button, and be ready to go again tomorrow."

The Flames, who only had 16 players available for Friday's opener, will seek to salvage a series split in Saturday's rematch at the Brad Boss Ice Arena at 4 p.m., when they will return two defensemen from suspensions incurred in last weekend's home sweep of Rochester. Game 2 will be webcast live on livebarn.com, a pay-per-view site.