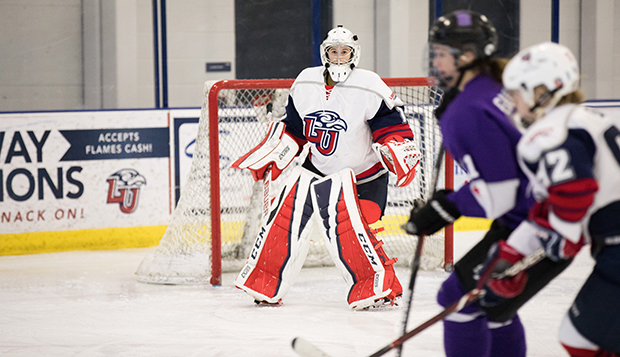 Playing four games in four days this past weekend, Liberty University's ACHA Division II women's hockey team equaled its total number of contests from the entire fall semester. After finishing 4-0 in fall play, the Lady Flames ranked 10th in the ACHA DII Eastern Region, were swept by top-ranked Bishop's University by 2-0 and 8-1 scores on Friday at the LaHaye Ice Center before traveling to California University of Pennsylvania and sweeping the Vulcans by 14-1 and 11-2 scores on Saturday and Sunday, respectively.

"After the first two periods, our team's speed kicked in and we were able to net 10 goals in the third period," Liberty Assistant Coach Rena Leone said of the first game at Cal-Penn. "Overall, everyone contributed to our win."

The Lady Flames (6-2) outshot their hosts by a 67-15 margin in the first game and by a 75-18 in the second, with senior goalie Kelly Hutton combining for 30 saves in the two triumphs.

The Lady Flames return to the LaHaye Ice Center this Saturday at 7 p.m. and Sunday at 11:30 a.m. for a series against Pittsburgh. Liberty swept the Panthers on the road on Oct. 27-28, winning by 3-1 and 5-0 scores.