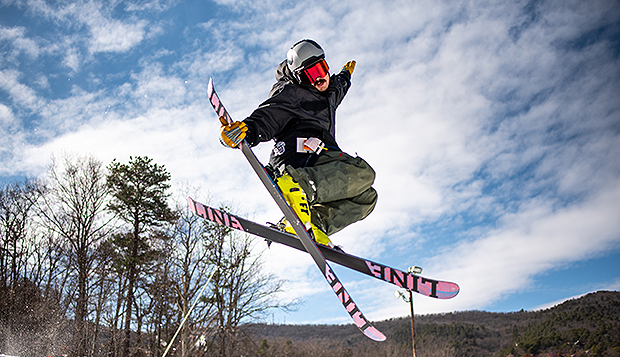 Combined with their first-place finishes in men's snowboarding and women's skiing and second-place men's skiing showing at the season-opening competition at Appalachian (N.C.) Ski Mountain on Jan. 19, the Flames and Lady Flames now lead the Southeast Conference standings in all three divisions.

"It was a pretty strong showing and good weekend," Liberty Assistant Coach Kevin Hoff said. "Jumps a little smaller than App mountain, but Massanutten had more challenging rail features, like a down, flat down kinked rail."

Freshmen Taylor Keeran (43.7) and Hannah Loftus (42.7) landed first- and second-place finishes, respectively, out of 11 skiers to lead the Lady Flames to victory.

"They both had pretty similar clean runs with some spins and a switch hit and a good grab on the final jump," Hoff said.

Liberty totaled 15 points to edge George Mason (19), and the University of Virginia (23).