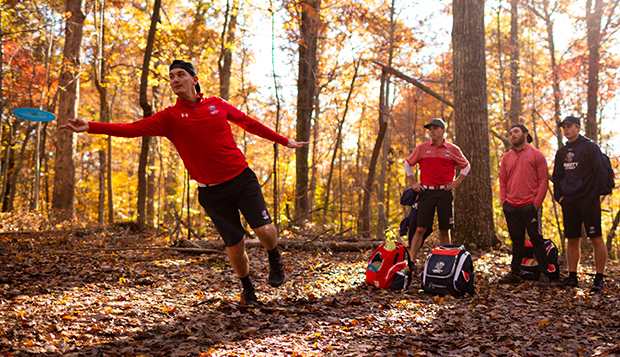 Senior Hunter Thomas tees off on Liberty's course near the Hydaway Outdoor Recreation Center during the Nov. 3-4 Flamethrower Invitational. (Photo by Nathan Spencer)

Liberty University's men's and women's disc golf teams have the largest rosters in program history this season and a large contingent of them competed in the third of eight Blue Ridge Area Winter League (BRAWL) series tournaments on Jan. 19 on a new course that Head Coach Steve Bowman helped design at Sandusky Park in Lynchburg.

Liberty will compete at another BRAWL event in Monroe, Va., on Feb. 16 before sending a couple foursomes to the North Carolina State Wolfpack Qualifier on Feb. 23-24 and its complete team to the Clemson Tiger Town Qualifier on March 9-10 and the inaugural Blue Ridge Conference Championships on March 16. Blue Ridge is a new 10-school conference that includes Clemson, Liberty, and NC State, who have committed to compete, as well as Eastern Tennessee State and Virginia Tech, which have expressed interest.

The conference championships will serve as a final preparation for the March 27-30 National Collegiate Disc Golf (NCDG) Championships at North Augusta, S.C.