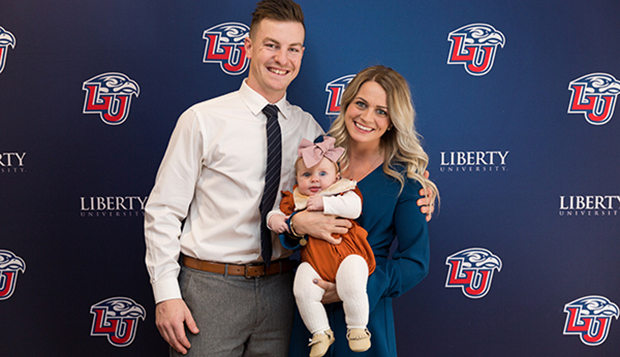 When she looks back on her career with Liberty University's ACHA Division I women's hockey team, former forward and two-year head captain Stacey McCombe remembers the relationships she formed and experiences she had off the ice as much as the goals she scored on it.

One of her closest friends on the team was fellow forward Sarah Stevenson, the first Lady Flames player drafted to play professionally in 2015 before dying of a sudden illness at age 24 last year.

"It's pretty tough to look back on the years and memories without getting emotional as almost each and every memory — both on and off the ice — involved my incredible linemate, Sarah Stevenson," McCombe said. "She certainly was responsible for a large part of my greatest memories and much of my success at Liberty."

McCombe, who was inducted into Liberty's fifth Club Sports Hall of Fame class during a Dec. 8 ceremony at the Hancock Welcome Center, scored 65 goals (fifth most in team history) and distributed 44 assists in 101 games over three seasons with the Lady Flames, netting seven game-winning goals in a single season (tied for second-most). After earning team MVP honors as a junior in 2011-12, she was an ACHA All-American and All-Tournament first-team selection in 2012-13, when she led Liberty to its first national championship game. (The Lady Flames have been back to the ACHA Division I Final Four every year since then, winning national titles in 2015 and 2018.)

McCombe credited Bloomfield and Assistant Coach Justin Forth as well as her husband — former Flames DI men's forward Andrew McCombe, who served as her presenter at Saturday's ceremony — for raising the level of her game.

"My skills definitely developed while playing for Liberty," she said. "Having the opportunity to train with excellent players and incredibly invested coaches and be on the ice with them daily impacted my abilities and in turn my achievements."

At the same time, she said the program improved by leaps and bounds as well.

"It is cool to look back and see just how much the women's program developed," McCombe said.

As a leader and a team captain, McCombe exemplified a positive work ethic and a joyful spirit around her sisters in Christ.

"I just tried to be a good role model on and off the ice — always giving it everything I had, walking alongside teammates through rough patches, and pointing them to the One who could truly encourage them," McCombe said.

Bloomfield said McCombe was as much a caring mentor as an on-ice leader to her teammates, especially as a head captain her junior and senior seasons, when she took several freshmen and sophomores under her wing.

"She was instrumental in keeping those girls spiritually grounded," he said. "She worked really hard and was a very good hockey player, too. More than any other captain we ever had, she really brought the girls together with her team spirit and just by her friendship."

Besides serving as her personal skate sharpener, Andrew McCombe ('14) inspired her to reach her highest potential.

"The first thing he helped me improve was my slap shot," Stacey McCombe said. "He also drastically changed the way I trained in the offseason. However, the greatest way he impacted my hockey career was that he gave me a new level of confidence in my abilities. He's my biggest support in all aspects of life, always encouraging me to be my best."

Together, they are raising their two sons, Hudson (3) and Remington (2), who are now learning how to skate, and daughter, Willow (4 months), the same way.