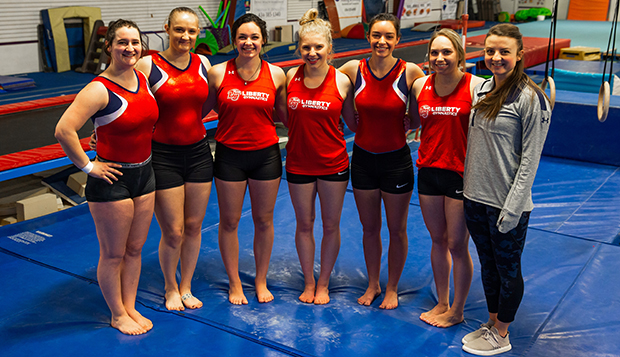 Fourth-year Liberty University gymnastics Head Coach Tim Kappel returns two of the top National Association of Intercollegiate Gymnastics Clubs (NAIGC) women in the nation, who could contend for titles in the all-around competition when the Lady Flames travel to the NAIGC National Championships, set for April 11-13 in Daytona Beach, Fla.

Seniors Julie Bouton, who finished as national runner-up last April in her home state of Texas, and McKella Johnson, who barely missed the 16-gymnast all-around finals, are pushing each other and motivating their teammates to excel in each of the four women's events — the balance beam, floor exercise, uneven bars, and vault.

"Julie is starting off as the one to beat," Kappel said. "If she's hitting on all four events, she's hard to catch, and McKella's not far behind her. They've been a huge part of the team since I've been here and have taken the program a long way. They're helping to pace the team and keep everybody focused."

The Lady Flames' only other returning gymnast is fellow senior Leah Corpora. There are four more competitors on the team, including Mia Harvey, a freshman all-around competitor from San Antonio.

"Hopefully, the addition of Mia this year as an all-arounder and the others in individual events will help round out our team scores and we will be a little stronger than last year, when we barely missed qualifying for finals as a team," Kappel said.

The Lady Flames are in their final week of preparation for their first meet of the spring semester, Saturday at Clemson University.

Kappel plans to enter the Lady Flames in one or two more meets before nationals, on Feb. 23 and March 10, and is awaiting confirmation from the host schools.

He is also hoping to recruit a men's team for next season after the Flames graduated their only two competitors last spring. There are less than 10 NCAA programs remaining in the nation, but more club teams are forming in their place.

"Men's gymnastics is huge in the state of Virginia, especially in the Virginia Beach and Northern Virginia areas," he said. "We've just got to find the kid who wants to continue the sport but is not quite at the NCAA level and is willing to give club gymnastics a chance."