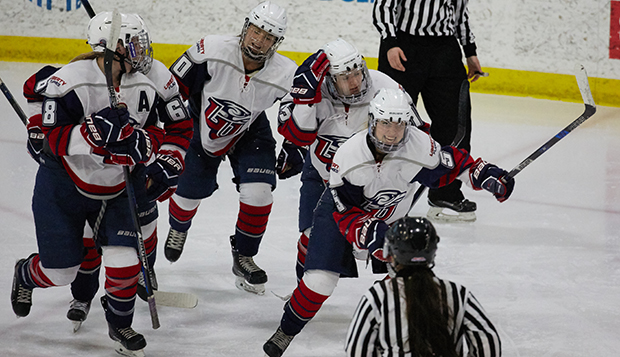 Liberty University's ACHA Division I women's hockey team got goals from five different players and rallied from behind twice on Sunday afternoon to complete its sweep of Bishop's University at the LaHaye Ice Center, winning a much tighter rematch, 5-2.

The Gaiters (9-3) were playing their fifth game in three days and the Lady Flames (22-1-3) defeated them for the third time in as many tries this season. Liberty outscored Bishop's by a 2-0 margin in both the second and third periods to seize control of what began as a back-and-forth battle.

"It was a really good hockey game," Lady Flames Head Coach Chris Lowes said. "The shots were pretty close in the first period, when they brought a different energy than they had (in Liberty's 9-1 win Saturday)."

Bishop's struck first on a power play when Miranda Snable's shot from the high slot got past Liberty junior forward Vanessa DeMerchant and ricocheted through the five hole of Lady Flames junior goalie Nadia Rupoli with 8:57 left in the first period.

Liberty netted the equalizer on a power play with 3:03 left in the first period when Shelby Bradford tucked in the rebound of fellow sophomore forward Shannon Fehr's shot from the left circle.

"Shelby's got a good touch around the net," Lowes said, noting that the Lady Flames finished 2-for-4 on the power play. "We had good execution and were ready for what they do special teams-wise."

The Gaiters reclaimed the lead 1:31 before the first intermission when defenseman Lauren MacCulloch chased down a long clearing pass up the middle of the ice and split Liberty defensemen C.J. Tipping and Alexis Paulmert before deking the puck past Rupoli and backhanding it into the net.

Liberty sophomore forward Danica Polson knotted the game at 2-2 with a swift cut from along the boards into the left circle where she lifted a wrist shot past Bishop's goalie Maude Russell at the 13:49 mark of the second period. DeMerchant slid home the game-winner for a beautiful goal assisted by junior defenseman Deena Birney and Polson with 25 seconds left as Liberty outshot Bishop's 16-4 in the second period and 44-24 for the game.

"Once we got even and tied it up in the second, we settled down," Lowes said. "We're a pretty good and confident team when we're tied or in the lead. Everyone gets a little flustered when we're down because it doesn't happen to us often, but it was good to see us bounce back. We needed to grind it out and get our chances and we locked them down defensively in the second and third."

Freshman forward Grace Machholz put away a rebound out in front off assists from Fehr and Polson to double Liberty's lead to 4-2 with 14:28 left in the third before senior forward Lauren McDonald capped the scoring unassisted with a shorthanded bar-down backhander on a breakaway with 10:45 to play.

The Lady Flames, ranked second in ACHA DI, have next week off before closing out their regular season against top-ranked Adrian College on Feb. 15 at 9:45 p.m. and Feb. 16 at 1 p.m. at the LaHaye Ice Center. Liberty beat the Bulldogs in the ACHA DI National Championships final for its second title in four seasons last year. Adrian dealt the Lady Flames their only loss and one of three ties this season, Oct. 26-27 in Michigan.

"We've got a bit of a rivalry building with them," Lowes said. "I know our girls will be excited to see them again and it will have a playoff-type atmosphere and intensity."