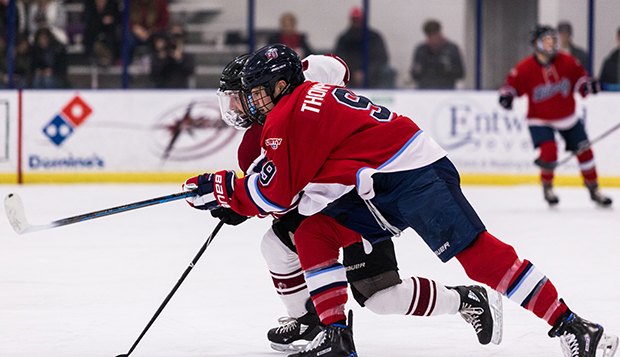 Junior forward Quinn Ryan, who netted two goals and distributed five assists in Friday's 13-2 opening win, added two more goals in the first period. One minute, 20 seconds after the opening faceoff, he received a pass from junior defenseman Matt Cruickshank and skated from left to right across the goalmouth before sticking the puck in with help from Josh Hamilton near the right post.

A minute and a half later, senior forward Kyle Crane sent a backhanded pass from behind the cage near post to junior linemate Andy Clarke for a one-timed finish and a 2-0 lead at the 17:22 mark of the first period.

Seconds after the Flames (19-4-2) went on their first power play with 15:15 to go in the first, Rochester forward Jared Selengowski chased down a long clearing pass and lifted a wrist shot past Liberty senior goalie Josh Halpenny for a shorthanded score, trimming the Warriors' deficit to 2-1.

The Flames struck back with a power-play goal three minutes later when sophomore forward Devin Pierce took a pass from junior defenseman Chaydan Lauber as he cut into the slot and ripped a shot past Rochester goalie Ryan Kostelnik, padding Liberty's lead to 3-1 with 12:04 left in the first.

But the Warriors (7-15-1) answered less than three minutes after that when Selengowski stole the puck and started another breakaway, this time slipping his shot through the five hole to make it a 3-2 contest with 9:06 to play in the period.

Like clockwork, Ryan cashed in for his second score three minutes later, following junior linemate Brock Thompson's shot from the left circle and tucking the puck into an open net between defensemen for a 4-2 lead with 6:02 left.

Moments after the Flames killed a three-on-five penalty, they capitalized for a fifth time when Cole Gammer slapped a sharp-angled crossing pass to fellow sophomore forward Jordan Bochinski who dove to poke the puck inside the left post for a 5-2 lead at the 1:27 mark.

Liberty added two unassisted goals late in the second period, the first by Pierce who skated through the right circle and deflected a shot from just inside the right endline off the shoulder of Rochester backup goalie Robert Meadows into the cage for a 6-2 advantage with 5:19 to go. Then, with 15 seconds left, junior center Cody Clarke tipped in a slapshot by Cruickshank from beyond the top of the left circle to push the lead to 7-2.

"It was nice to know we got contributions from different guys, like Andy and Cody Clarke, who are guys who work hard in every practice and every game for us were rewarded with both scoring tonight," Flames Head Coach Kirk Handy said.

Cruickshank added a shorthanded goal just over five minutes into the third period to make it 8-2.

Bochinski capped the scoring with 38 seconds remaining in regulation, receiving an assist across the slot from Thompson and firing his shot past Meadows, giving the Flames a seven-goal margin of victory that will help their national rankings.

Late in the game, Lauber, sophomore forward Ryan Cox, and junior defensemen Basil Reynolds were ejected following a fight that erupted along the Warriors' bench and will serve one- and two-game (Cox) suspensions.

Liberty outshot Rochester 56-16 and Halpenny made 14 saves to record his second win of the weekend.

Liberty is closing in on defending its ESCHL regular-season title as it travels to Rhode Island for two games next Friday at 7 p.m. and Saturday at 4 p.m.