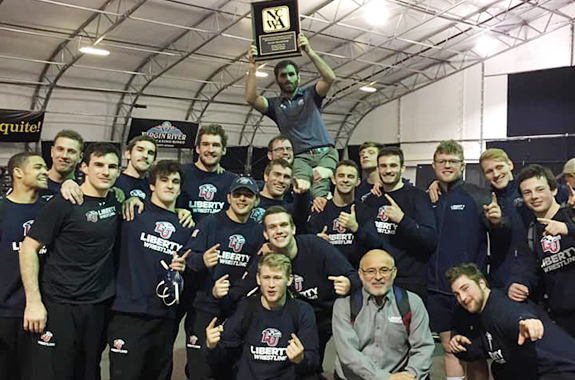 It was Liberty's fourth NCWA National Duals tournament crown altogether, also a record, and the Flames pulled it off in nearly as dramatic fashion as they had against Emmanuel College last season on their home mats.

The Mid-Atlantic Conference rivals had met in the consolation bracket of the Jan. 11-12 Virginia Duals, when the Flames rallied from a 24-4 deficit to beat the Builders, 26-24.

"It's hard to give another team that kind of momentum, but our guys were anticipating going down early," Liberty Assistant Coach Chris Williamson said. "Our senior guys and upperweights, especially, did a really good job of keeping their composure, not panicking, and wrestling the way they should have."

"That basically sealed the dual up for us," Williamson said. "Any time Ross would get out of position, Jeff would put him on his back and he dominated the match."

By winning the National Duals, the Flames earned 20 bonus points toward the defense of their NCWA Grand National Championship, set for March 14-16 in Allen,Texas.

"It's pretty amazing," Williamson said. "We were pumped up afterwards, but we realize that's only half of the battle. We can get excited that we are Dual National Champions, but the big one is in March."