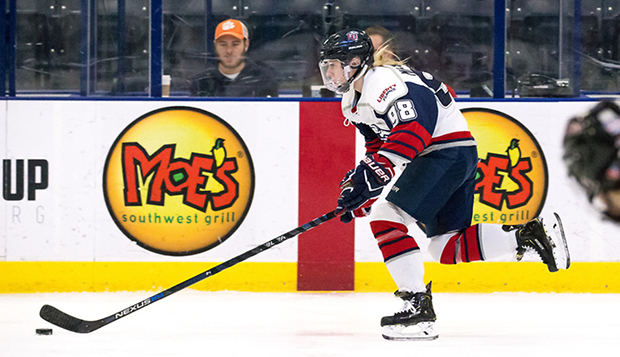 Efficient execution on the offensive end enabled Liberty University's ACHA Division I women's hockey team to pull away from Bishop's University, 9-1 on Saturday afternoon at the LaHaye Ice Center.

Liberty had won a back-and-forth battle with the Gaiters, an ACHA Division II program based in Québec, 4-3 on Oct. 14 at the UMass Showcase. Bishop's (8-2) was coming off Friday's sweep of the Lady Flames' Division II team, winning by 2-0 and 8-1 scores.

"Give them credit. They're playing six games in three days," Liberty Head Coach Chris Lowes said, noting that the Gaiters are also playing twice against Navy's DII team this weekend. "That's really tough. They kept it close for a while. We have a bigger bench but they're a good team. We had some stints there where we were really firing and we showed a lot of finish tonight."

With 14:39 left in the first period, junior forward Rachel Gibson threaded a sharp-angled shot from the left endline between Gaiters' goalie Jade Shushu Saulnier-cyr and the left post for an early 1-0 lead.

"Rachel (Gibson) and Shelby (Bradford) and I finally started to click as a line so we were able to create some chemistry and pull together as a team," DeMerchant said.

Liberty extended its lead to 4-1 with two goals in the final five minutes of the second period, the first on a power play when junior forward Alex Smibert ripped a high wrist shot past a screen set in front by freshman forward Grace Machholz at the 4:46 mark. Just nine seconds later, Machholz struck with a one-timed shot from directly in front off a crossing pass from Polson.

With 17:22 remaining in the third, Polson slammed home the rebound of DeMerchant's shot from the left circle, stretching Liberty's lead to 5-1. Just over five minutes later, Smibert crashed the cage to clean up the putback of a shot by sophomore defenseman Sydney Pierce with a secondary assist from senior forward Lauren McDonald for a 6-1 advantage with 12:06 remaining.

A minute and a half expired before junior defenseman Emily John extended Liberty's edge to 7-1 from point-blank range in front, cleaning up the rebound of a shot by DeMerchant with 10:26 to go. Then, with 6:06 left, the Lady Flames continued to pour it on with DeMerchant finishing off a beautiful cross-crease assist from Bradford to make it 8-1 with 6:06 to go. With 4:45 to play, Liberty freshman forward Alexis Paulmert got credit for a wraparound goal that actually bounced off Bishops defenseman Emily Purdy inside the right post for the final score.

Liberty will host Bishop's in Sunday's rematch at 11 a.m., webcast live by LFSN.