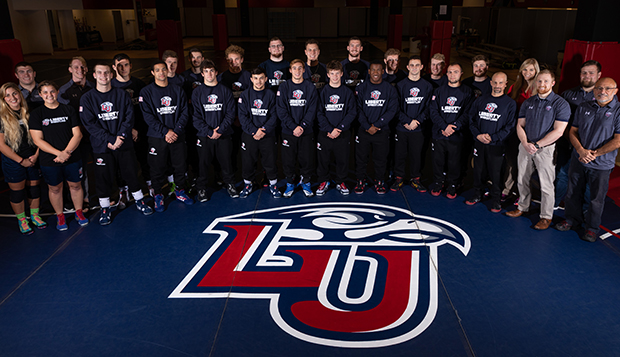 Liberty is vying to become the first team to defend its NCWA National Duals title after winning a record third crown last season.

Seeded first in this weekend's NCWA National Duals in Mesquite, Nev., Liberty University's men's wrestling team advanced out of its pool as the only undefeated team after Friday's first three matches.

Seeking to become the first team to defend its title after capturing a record third crown last season, the Flames opened the day with a 47-12 triumph over No. 9-seeded Washington State before overwhelming No. 15 MIT, 57-6, and No. 7 Toledo, 51-12.

"We dominated," Liberty Head Coach Jesse Castro said. "As the day went on, I think we wrestled better with each match. We had two national finalists, and good kids up and down the lineup. But we were able to use different wrestlers and I put some of my backups in there with the hope that our starters will be fresher (for Saturday's finals)."

The Flames will wrestle the loser of Friday night's late match between Mid-Atlantic Conference rival Apprentice and tournament host UNLV in Saturday's quarterfinal round set for 1:45 p.m. (EST).

"UNLV's got a pretty strong team, but Apprentice is just so deep," Castro said.