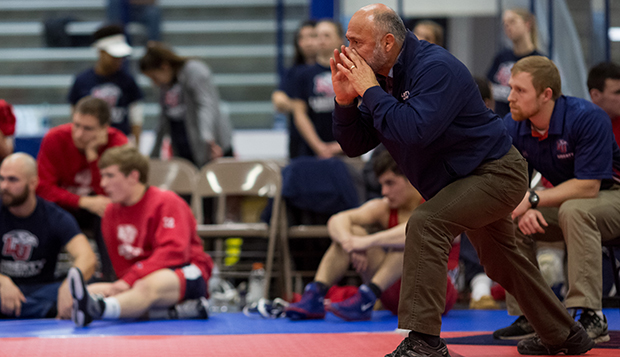 Becoming the first team to successfully defend its NCWA National Duals title this weekend in Mesquite, Nev., will be more challenging for Liberty University's men's wrestling team than winning its record third championship was last season, when the Flames hosted the event for the second year in a row.

It is the first time the tournament will take place out West — in future years, it will alternate between East and West host schools — and exactly half of the teams in the 16-team tournament field are from West of the Mississippi.

"We haven't been out West as a program since we were an NCAA Division I program and wrestled at Reno (Nev.)," Liberty Head Coach Jesse Castro said. "We are excited to see some of those teams we've never seen before in a dual tournament."

In last year's NCWA National Duals championship final, Liberty erased an early 15-3 deficit to deny Emmanuel (Ga.) College a first-ever title defense. Emmanuel moved to the NCAA Division I level this year. That leaves top-ranked Mid-Atlantic Conference rival Apprentice School — which Liberty rallied from a 24-4 deficit to eliminate in the consolation semifinals of last weekend's Virginia Duals — as one of the top challengers for the second-ranked Flames to repeat as champs.

"It's going to be competitive," Castro said. "I don't like that we have some guys that are injured, but we are comfortable with our depth. We're going to have to be careful (to avoid further injuries), but, Lord willing, we're going to at least vie for the team championship."

Liberty, seeded first, will wrestle Washington State in the first round of pool play on Friday at 1 p.m. (EST) before meeting No. 15 MIT at 4;30 p.m. and No. 7 Toledo at 8 p.m. The winner of that pool will challenge the runner up in the pool that includes No. 2 Apprentice and No. 8 UNLV, in Saturday's 1:45 p.m. (EST) quarterfinals.

To have time to adjust to jetlag and altitude changes, Liberty will fly out to Las Vegas on Wednesday with a team of 20 wrestlers, providing depth at most of the 11 weight classes. Individually, Liberty features two wrestlers ranked No. 1 in their respective weight classes — senior captain Austin Amos (197 pounds), the reigning 235-pound national champion, and sophomore Jeffrey Allen (235), who transferred in from Virginia Tech over the summer. Senior captain Dominick Johnson is ranked second at heavyweight, junior Sam Karel is ranked second at 174 pounds, and sophomore Chad Cantrell is ranked third at 149 pounds.

The Flames have strengthened their lightweight classes since the Virginia Duals, with freshman Lukas Araujo transferring in for the spring semester to compete at 125 pounds and L.J. White prepared to make his debut for the Flames at 133 pounds. Additionally, Ian McIlhenny, the younger brother of 184-pound senior captain Josh McIlhenny, joins the team as a freshman at 141 pounds and Edmond DeAngelis transferred in from Wheaton (Ill.) College, where he wrestled this past fall, and will complement junior Andrew Burgette at 157 pounds.