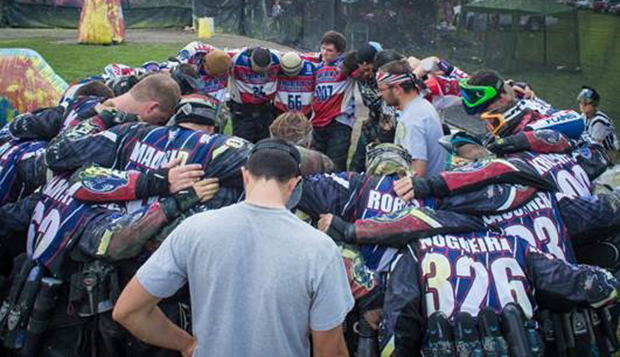 "My heart just beamed, it just shines because I know that I was a little part of it," Hoglund said as he was inducted into the Club Sports Hall of Fame on Saturday, Dec. 8, in the Hancock Welcome Center.

He guided the Flames' Class A line to three Final Four showings at nationals from 2010-12 and coached both of his successors, fourth-year Head Coach Brian Davidson ('12) and Assistant Coach Aaron Thompson ('15).

Their on-field success was secondary to the spiritual culture Hoglund helped to create within the program, which trained the Flames to stand out and reflect the light of Christ through their sport.

Hoglund developed and influenced hundreds of players over his eight seasons at the helm of the Flames' program from 2008-15.

"I love the sport of paintball, but it's not the paintball that made me love it," Hoglund said. "It's the guys, the players. I had players who were really dealing with some hard times and I didn't see how that affected them on the field. I saw how that affected them as people. That's where my heart is. I tried to give them life lessons in addition to paintball lessons."

His players are just a portion of those he has positively impacted throughout his career.

Since receiving his master's degree at Liberty, Hoglund has worked with local families and children with disabilities through behavioral therapy and intensive in-home counseling. He is in his 13th year teaching elementary special education-inclusion classes, now in Yorktown, Va. He and his wife, Leslie, have raised five children, including two adopted sons from China with Down syndrome.

"Far more important than any of the accolades this man has on the paintball field are really who he is as a husband, as a father, and as a life coach," Thompson ('15) said as he presented Hoglund. "The greatest coaches step into their God-given calling by exemplifying a life of humility, a life of grace, discipline, and conviction. They push their athletes to be better men and women both on and off the field. This man has never just been in the business of coaching. He has been in the business of disciple-making. He has played a really integral role in my personal life, in my faith, and in the faith of many others."

Davidson, who Hoglund considers the best player he ever coached at Liberty (Thompson, also a three-year team captain, was a close second), appreciates the legacy he left behind.

"He definitely laid a good foundation for our program and our team and helped keep us spiritually motivated," he said. "I always looked up to him for that and tried to incorporate a lot of that in my coaching as well. I definitely give him a lot of credit for becoming the man and coach and spiritual leader that I am today. He's always been someone I could call for advice about life."