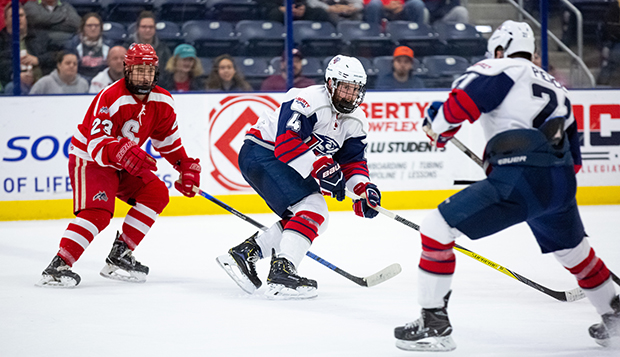 Liberty University's ACHA Division I men's hockey team traveled to New York to start the new year on a seven-game winning streak and having won its last five matchups with ESCHL rival Stony Brook. But the sixth-ranked Flames (17-4-2, 13-1-2 ESCHL) will return home reeling from back-to-back setbacks to the 15th-ranked Seawolves (11-6-3, 6-6 ESCHL), including a 4-1 defeat Sunday at The Rinx on Long Island.

"It was definitely a disappointing weekend for us," Liberty Head Coach Kirk Handy said. "We weren't able to execute the way we wanted to play. We didn't do much of anything tonight. No one is satisfied with the performance any of us had."

The Flames outshot Stony Brook, 36-35, but unlike in Friday night's shootout loss, they lost many more faceoffs than they won. They also were inefficient on special teams.

"Our power play was a struggle all weekend," Handy said. "We're going to have to be better. It's a good opportunity for us to regroup as a team, to battle together and get things back on track next week."

Moments after killing off a Liberty power play, with 4:30 left in the first period, Stony Brook forward Dustin Rinaldo gained control of a loose puck along the back boards and sneaked a backhanded wraparound past Flames senior goalie Cole Burack inside the right post for a 1-0 edge.

The Seawolves padded their lead to 3-0 with two goals late in the second period, with Bradley Riccardi setting up Keith O'Brien for a point-blank shot on a two-on-one counterattack with 5:00 left and Palmieri lifting a wrist shot from deep in the left circle through traffic into the net for a power-play score with 30 seconds remaining.

Stony Brook built a commanding 4-0 advantage with 15:04 left in regulation when Riccardi won a faceoff back to Frank Coscia at the top of the left circle where he fired a wrist shot through O'Brien's screen inside the left post.

Liberty averted a shutout by capitalizing on a power-play goal with 5:44 to go when junior forward Brock Thompson lifted a putback past Sean Keating from in the right crease off junior defenseman Jacob Fricks' shot from the high slot. But the Flames were unable to generate any more quality scoring chances down the stretch.

"We have full confidence in what we are doing and we're just going to have to fix it for next week," Handy said. "We're encouraged by the group of guys we've got in that locker room and we know we can turn it back around."

The Flames will return home to face Rochester this Friday and Saturday at 7 p.m. in a non-conference series at the LaHaye Ice Center.