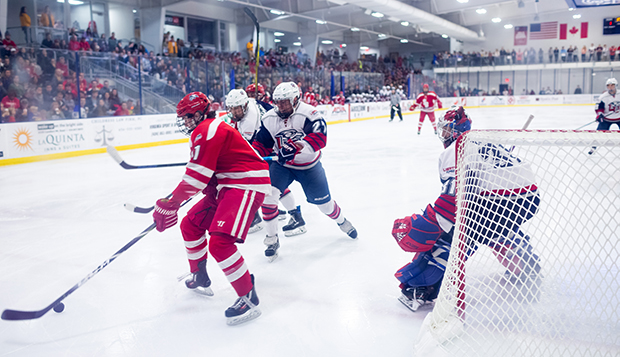 Liberty University's ACHA Division I men's hockey team let a 3-0 lead after the first period slip away, giving up three unanswered goals in the second before falling, 4-3 in a shootout, in Saturday's late-night spring semester opener against Stony Brook at The Rinx on Long Island, N.Y.

The game was a rematch of the past two ESCHL Tournament championship games, won by the Flames. The loss snaps Liberty's seven-game winning streak and tightens the race for the ESCHL regular-season title and autobid to the March 21-26 ACHA National Championships near Dallas.

Junior forward Quinn Ryan, Liberty's leading scorer on the season with 20 goals and 20 assists, padded the lead to 2-0 off an assist from incoming freshman linemate Josh Fricks, who stretched it to 3-0 with his first goal for the Flames moments later.

"Josh had a solid game for us," Liberty Head Coach Kirk Handy said. "It was nice to see him fit in with Quinn (Ryan) and Brock (Thompson) and finish with a goal and an assist."

The Flames (17-3-2, 13-0-2 ESCHL) held the Seawolves scoreless on a late 5-on-3 power play and went into the first intermission with a seemingly commanding 3-0 advantage.

"I thought we played solid in the first period," Handy said. "Our PK was excellent as we killed off three penalties."

But Stony Brook (10-6-3, 5-6 ESCHL) struck back with three goals of its own in the second period — by Keith O'Brien, Kevin Murphy, and the equalizer by Devin Palmieri with 1:05 to go. That's the way the score stayed for the entire third period, sending the contest into overtime after Liberty killed a penalty but couldn't capitalize on a power play in the closing minutes.

"The second period, our game was a little complacent," Handy said. "We kind of took our foot off the gas pedal. We had all kinds of opportunities on the power play and we weren't able to find the back of the net. I thought we played well in overtime and in the shootout, we had our chances."

"Our penalty kill was very strong tonight, but our power play didn't execute the way that we wanted to," Handy said. "That's an area we need to improve on. We believe in our team, we believe in our guys. We're going to learn from this and be better tomorrow."

Sunday's rematch is set for 3:30 p.m. and will be webcast live by Stony Brook.