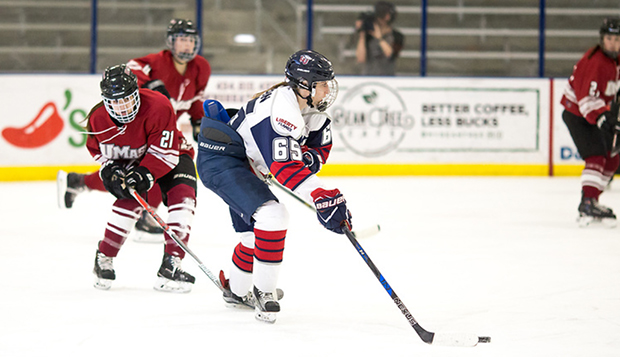 In a defensive showdown between the two most prominent programs in the nation over the past five seasons, Liberty University's ACHA Division I women's hockey team scored two goals in the first two minutes of the third period and held on for a 2-1 triumph over host Miami (Ohio) University, Saturday night at Goggin Ice Center.

Liberty junior goalie Nadia Rupoli made 13 saves to preserve the one-goal win, one night after Liberty rallied from behind three times to salvage a 4-4 tie in Friday's opener. After going 2-for-2 on the power play in that contest, the Lady Flames went 0-for-7 in the rematch.

Liberty senior forward Lauren McDonald, who netted the equalizer with five minutes to play in the opener, ended a scoreless stalemate by tipping in graduate forward C.J. Tipping's shot from along the right boards off an assist from junior forward Alex Smibert just 22 seconds after the third-period faceoff.

Less than a minute and a half later, sophomore forward Shelby Bradford converted the game-winning goal by finishing a feed from junior forward Vanessa DeMerchant for a 2-0 advantage with 18:20 to play.

RedHawks forward Sara Gargasz cut the deficit in half with a shorthanded goal with 10:42 remaining in regulation before the second half of the third period ended the way the first two periods had — in a scoreless duel.

Liberty returns home to the LaHaye Ice Center next weekend for two games against Bishop's University, an ACHA Division II team out of Quebec, Canada. The puck is scheduled to drop at 2:30 p.m. Saturday and again at 11 a.m. on Sunday.