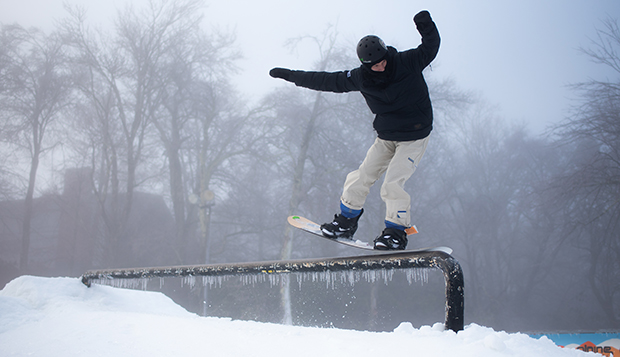 "It was a very good course setup for our first comp of the year," Flames Head Coach Isaac Gibson said of the layout that included two jumps and three rail features. "The jumps were good sized but the ice made the snow faster so you had to adjust your speed and a few overshot their jumps, landed really deep, and washed out. With the conditions we had taken into consideration, we did well."

Liberty junior Milo Rice, competing for the Flames for the first time, posted the highest score in the men's snowboard event with an 84, topping NC State's Matt Dunkel (75) and senior teammate Garrett Long (68.66).

"Milo performed really well and had a more technical rail line," Gibson said. "Garrett's jumps were really good and he had a really good first run, but he came out early on a few of his rail tricks and fell after catching an edge on his second run."

In the men's skiing competition, Liberty placed all six of its travel team members in the top 10, but was nipped by UNC in the team standings by a 10-11 total.