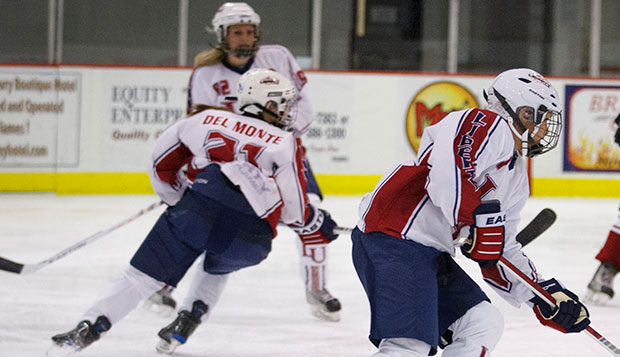 Friday's snowfall cut the weekend series in half as the Reston Raiders delayed their travel plans from Northern Virginia on Saturday. Liberty (18-2) quickly made up for the lost ice time, racking up three goals in the first period to take control.

Jenny MacArthur started the scoring for the Lady Flames in the first period off an assist from McCombe at the 12:44 mark.

Five-and-a-half minutes later, McCombe recorded an unassisted goal, taking the puck out of Liberty's end, skating all the way down the ice, and beating the Raiders' goalkeeper with a shot to the upper netting.

Late in the first period, McCombe put the Lady Flames up 3-0 off assists from MacArthur and Courtney Fischer.

"That was a really good pass out of our end by Courtney," Liberty University head coach Paul Bloomfield said. "MacArthur took the pass, played it up and passed it to Stacey and she put it on net."

Reston finally got on the scoreboard at the 15:12 mark of the second period by taking advantage of a defensive breakdown by the Lady Flames, intercepting an outlet pass before scoring on a putback of a shot blocked by freshman goalie Kristina Toppazzini.

"She made the first save, there was a little rebound and they caught her flat-footed," Bloomfield said, noting the first shot got her out of position for the follow. "Toppazzini did a good job overall. It was a good opportunity for her to play and get some confidence."

Less than three minutes later, the Lady Flames extended their lead back to three goals when Peleshok converted off assists from sophomore center Keely Beisinger and freshman defender Fowler.

Then, with 5:02 left in the second period, Peleshok scored again, unassisted this time during a Reston power play, to make it 5-1.

"Her goal was even more spectacular because we were shorthanded," Bloomfield said. "We were killing a penalty and she intercepted one of their passes and she just took off. That's why we have her on the penalty kill, because she's very quick and she can beat their girls to the races."

Finally, less than three minutes into the third period, Carrie Jickling capped the scoring with another unassisted goal.

"She's pretty quick, too," Bloomfield said. "She's just a freshman and she's coming into her game. She got a breakaway and their goalie couldn't stop her.

"We've got two or three girls who have pretty good speed and they can capitalize when those opportunities come."

Though it came against a non-conference team, the win could help solidify the Lady Flames' No. 1 ranking in this week's ACHA DI poll.

"I imagine we'll still be up there," Bloomfield said. "If we're not, it'll be because we didn't play a conference game" since splitting games at No. 4 Robert Morris last weekend.

"They're kind of a mystery team because they're not very highly ranked, but they've beaten a couple of the top teams," Bloomfield said.

The Rams (9-6-1) have plenty of incentive to upset the Lady Flames as they are seeking to move up in the rankings and earn one of the eight bids to the national tournament.

"These games are all very important for the last ranking," Bloomfield said. "They're better this year than they have been in the past and they could have a chance of getting in if they beat us all three games, but they better not."

Liberty has advanced to nationals four times since 2006, but never as the No. 1 seed.

This year, the ACHA national tournament will be played March 6-10 in Ashburn, Va., outside of Washington, D.C.