'Words of Worth' personal for Lady Flames skater Thacker 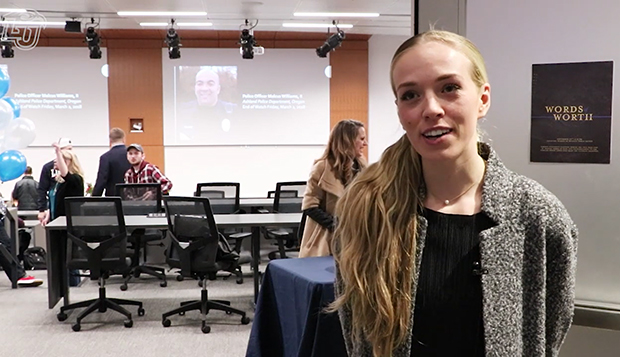 Growing up without her father was difficult for Katherine Thacker, now a senior captain on Liberty University's synchronized skating team who also competes in ice dancing for the Lady Flames' figure skating team.

As a way to remember and honor her father, Brandon Thacker — an investigator in the Kentucky Department of Alcohol Beverage Control officer in Kentucky who was killed in the line of duty on April 16, 1998, when Katherine was only 18 months old — she started a letter-writing campaign at Liberty called "Words of Worth" in 2016.

The third-annual event was held Nov. 29 in the Freedom Tower, featuring a panel discussion led by officers from the Lynchburg Police Department and others from Virginia Beach, New Jersey, and Kentucky, as well as Jennifer Thacker, Katherine's mom who has become an outspoken leader in honoring fallen officers. Liberty's Student Government Association and Criminal Justice Club co-sponsored the event.

But the main focus was the spiritual outreach and emotional support to the families of more than 100 police officers killed while serving others throughout the country over the previous year. Hundreds of Liberty students, including NCAA and Club Sports student-athletes, wrote encouraging letters to families of fallen officers.

"It's really cool to see how the university is able to come around and really support such a great event with a great cause," Lady Flames synchronized skating Head Coach Tatiana Payne said. "It's just a really good ministry opportunity for our team to serve."

"Every word and every sentence that's written on this paper I know has a tremendous impact on the families who are receiving the cards," Katherine Thacker said. "People care about what my father did. He put his life on the line in order to protect other people and there are officers every single month who are dying trying to protect people in their communities. It's important to say that we're thankful for their job and for the time that they took away from their family in order to protect us."