Flames wrestle past Builders before falling in third-place final 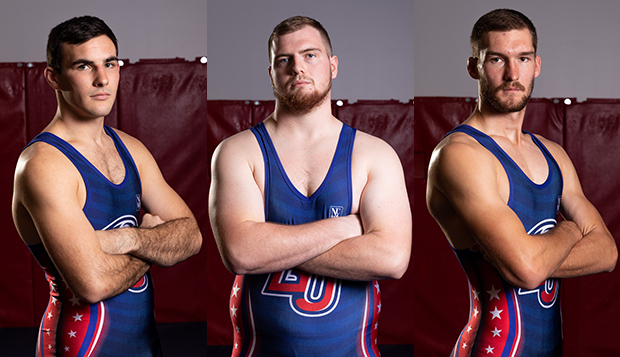 The Builders were the only other NCWA program in the eight-team American College Division and the same team the Flames rallied past to win last spring's Grand National Championships in dramatic fashion in Allen, Texas.

Through the first six weight classes, sophomore 149-pounder Chad Cantrell was the only Liberty wrestler to win his match — by 12-3 major decision over Tyler Allen. Flames senior 174-pounder Cody Richmond turned the momentum in Liberty's favor with a 9-3 decision over William Heath before senior captains Josh McIlhenny and Austin Amos recorded back-to-back pins at 184 and 197, respectively, to pull the Flames back within 24-19.

If Liberty was wrestling any team but Apprentice, it would have needed a pin at heavyweight to emerge victorious. But since both teams are in the NCWA, which wrestles a 235-pound weight class, the Flames only needed two wins to prevail and sophomore Jeffrey Allen and senior captain Dominick Johnson got them, by 6-1 decision and 14-0 major decision, respectively — over Ross Graham at 235 and Peter Cortapasso at heavyweight.

The Flames will next travel to Las Vegas Jan. 25-26 when they will attempt to become the first to defend their NCWA National Duals tournament title after becoming the first three-time champion last season.