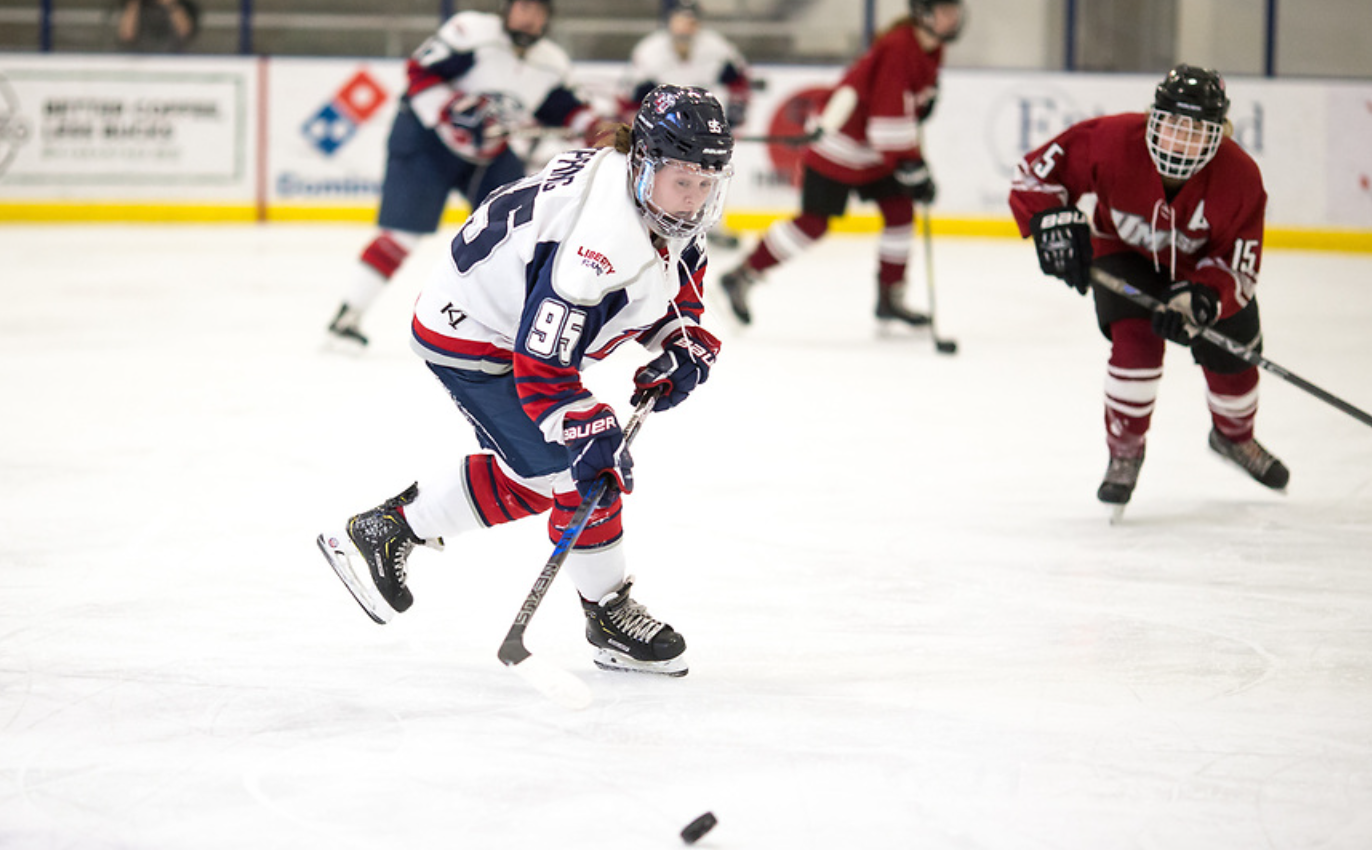 A four-goal third period broke open another close contest as Liberty University's second-ranked ACHA Division I women's hockey team completed a semester-opening sweep of No. 9 Massachusetts with a 6-1 conquest, Saturday afternoon at the LaHaye Ice Center.

"We struggled a little bit at times, partly because UMass did a good job and partly us getting back into the routine, but we certainly finished with our best period and we showed a bit of offensive finish," Head Coach Chris Lowes said after the Lady Flames (19-1-2) outshot the Minutewomen, 46-20, and extended their winning streak to 11 games.

Seconds after UMass (7-7-1) killed a penalty, Liberty sophomore forward Shelby Bradford stole the puck in the neutral zone and started a quick counterattack near the red line, sending a crossing pass to senior forward Lauren McDonald at the blue line for a breakaway. She skated around a defenseman before cutting back through the left crease and flipping a backhand through the five-hole of goalie Casey Marshall for a 1-0 lead at the 14:41 mark of the first period.

"(McDonald) had a great weekend," Lowes added. "She had a lot of energy and our girls feed off of it."

In four-on-four action with 6:43 left in the first period, Minutewomen forward Juliana Dolan skated out of her own defensive zone and weaved her way through traffic for a breakaway opportunity, lifting her wrist shot over the glove of Lady Flames junior goalie Nadia Rupoli to tie the game at 1-1.

Bradford netted the game-winner with 53 seconds left in the second period by receiving and capitalizing on an immaculately timed outlet pass from McDonald. Bradford came out of the penalty box just as McDonald sent a clear from deep in her own zone off the left boards. She skated onto the puck before deftly wrapping it around Marshall for a one-one-one score.

"That was a beautiful pass," Bradford said. "She knew I was coming out in three seconds and she timed it perfectly."

The Lady Flames stretched their advantage to 3-1 with 16:11 to go in the third when junior forward Rachel Gibson sent a pass from behind the cage to Bradford in the left crease and junior forward Vanessa DeMerchant tucked the putback past Marshall inside the right post.

"That's a new line for us — Bradford, Gibson, and DeMerchant — and it was good to see them produce," Lowes said. "They had four goals today so that's very encouraging."

Then, with 10:06 remaining in regulation, Bradford padded Liberty's lead to 4-1 by controlling a crisp, cross-ice outlet pass from Gibson, skating in unguarded from the blue line, and lifting a wrist shot just beneath the crossbar.

Bradford completed her hat trick by capitalizing on a power play with 2:03 to play, receiving a pass from junior forward Alex Smibert and chipping in the putback of her own blocked shot for a 5-1 Liberty lead. Graduate defenseman C.J. Tipping iced the victory 36 seconds later by firing a shot from the high slot inside the left post.

"It was good to see our power play get a couple, even though they were late," Lowes said. "Hopefully, that will give us a little momentum going into a big weekend next weekend at Miami. I'm excited to go on the road and play another top team. I expect them to be great games."

The Lady Flames haven't faced the sixth-ranked RedHawks (11-4-1) since losing to them in the 2017 ACHA DI National Championship final, Miami's third title in four seasons. The puck will drop at Goggin Ice Arena in Oxford, Ohio, at 9:45 p.m. Friday and again at 5:45 p.m. on Saturday.