Lady Flames fend off No. 9 UMass, extend win streak to 10 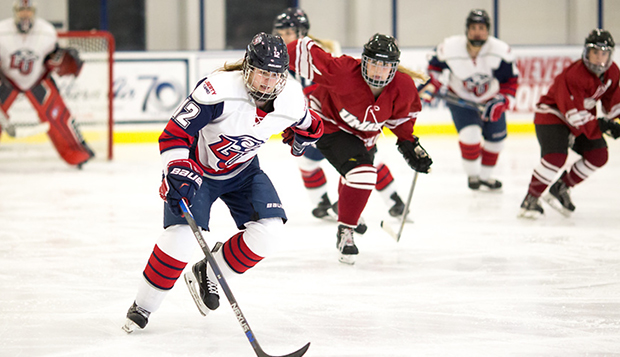 Liberty University's ACHA Division I women's hockey team, the defending national champions ranked second in the latest poll, weathered a persistent storm from No. 9 Massachusetts in a 4-2 triumph in the 2019 debut for both teams, Friday night at the LaHaye Ice Center.

"They're one spot away from making it to nationals so they were going to try their best and come at us as hard as they can," Lady Flames junior defenseman Emily John said.

Liberty got goals from four different players and extended its winning streak to 10 games dating back to an Oct. 27 tie at top-ranked Adrian, the team it defeated in the 2018 national championship game. The Lady Flames held their own defensively after giving up the tying goals in the second period, shutting the Minutewomen (7-6-1) out in the third to secure the victory.

"We've been really working in practice on just being tougher in the D zone especially and it's really nice when we get to play a team like UMass, which is a really aggressive team," John said. "They fought hard, which was good."

The Lady Flames (18-1-2) seized their first lead 3:19 after the opening faceoff when Mackenzie Carroll received fellow junior forward Tiana Lisle's backhanded feed from along the backboards and tucked the puck past UMass goalie Casey Marshall from deep in the left crease.

However, UMass responded quickly to trim the deficit to 2-1 less than a minute and a half later when forward Juliana Dolan backhanded the rebound of her own shot, blocked by Liberty junior goalie Nadia Rupoli, inside the left post with 15:11 left in the second period.

Then, with the Minutewomen on a power play two and a half minutes later, forward Joanna Olson had her shot from the left wing deflected past Rupoli into the lower left corner of the cage, knotting the contest at 2-2.

"They had an overload power play and I should have attacked the shooter at that point," John said. "I didn't jump and the puck deflected off my skate and Nadia said it hit her skate and then it went in, which was really unfortunate."

The Lady Flames continued their streak of starting quickly in the third period, scoring the game-winner 3:13 into the final stanza when junior forward Aly Morris' shot in the slot was deflected past McDonald in front and it bounced past Marshall into the back of the net.

The Minutewomen pulled Marshall for the final minute and they crashed the net, with players landing in top of Rupoli during one scrum before the cage was dislodged from its moorings.

"That was stressful, to say the least," John said. "It's always hard to practice something like that, so it's really exciting when you get to play it. It was a physical game. The refs let us play our game."

Liberty junior forward Alex Smibert ended the UMass threat by capitalizing on the final score, chasing down a loose puck and wrapping it around the right post for an empty-netter with 25 seconds to play.

The Lady Flames and Minutewomen will battle again in Saturday's 4 p.m. rematch back at LaHaye.