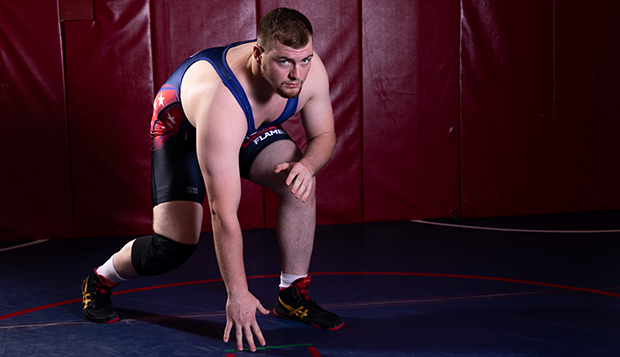 Senior captain Dominick Johnson won his only heavyweight match of the day by fall over Long Island Post. (Photo by Nathan Spencer)

Competing in the 39th annual Virginia Duals at the Hampton Coliseum, Liberty University's men's wrestling team was knocked to the consolation bracket of the American College division with a 26-16 loss to Long Island University Post in the first round before bouncing back to beat Greensboro, 34-12 in the consolation quarterfinals on Friday.

Wrestling without a 133-pounder put the Flames in an early 10-0 hole against Long Island and they dug themselves into an 18-0 deficit with back-to-back losses at 141 and 149 pounds. Sophomore 157-pounder Andrew Burgette ended the drought with a 10-2 major decision over Eduardo Ramirez before junior Luke Ely scored a 6-2 decision over Kenneth Cooper to pull back within 18-7. But consecutive major decisions at 174 and 184 clinched the team win for LIUP before senior captains Austin Amos' 7-3 decision over Mark Malico at 197 and Dominick Johnson's pin of Timothy Nagosky narrowed the final score.

Trailing Greensboro 12-6 after trading forfeits and dropping two decisions, Burgette got the Flames going in the first consolation match with a 10-8 decision over Conan Wilson. Eli followed with a 4-2 win over Quaevon Cannon before Liberty clinched the team victory with three straight pins by Karel, senior 184-pounder Josh McIlhenny, and Amos. Sophomore Jeffrey Allen capped the 22-point team triumph with a 15-4 major decision over Vince Wilson.

Action will resume on Saturday with the Flames competing in the consolation semifinals against the Apprentice School, the only other NCWA program in the eight-team bracket. With a win, they would advance to the consolation final and duel the winner between Alderson Broaddus and Long Island for third place. LIUP lost its championship semifinal match to Ferrum, 24-21.

The complete tournament bracket and individual and team results are available online.