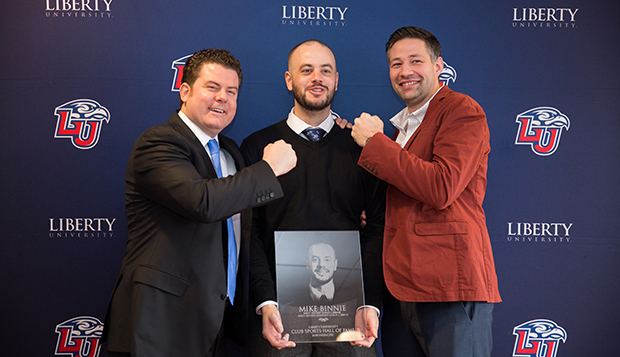 From starting in net for Liberty University in the 2006 ACHA Division II National Championship game, an overtime loss to Oakland (Mich.), to coaching the Flames' goalies from 2009-14, Mike Binnie played an integral role in helping the men's hockey program progress from the ACHA Division II to the DI ranks.

For his success on the ice and contributions as an assistant coach and Club Sports events coordinator, Binnie was inducted into the fifth class of the Club Sports Hall of Fame during a ceremony on Dec. 8 in the Hancock Welcome Center.

Binnie earned his undergraduate degree in Sport Management from Liberty in 2008 and his master's degree in Sport Administration in 2010. He applied that knowledge as a coach and in running Club Sports events on campus.

"Mike definitely ranks up there as one of the best goalies we ever had, and he was one of the people on the ground for us when we started Club Sports," ACHA DI men's hockey Head Coach and Club Sports Vice President and Athletic Director Kirk Handy said. "He served as a graduate assistant and he was a coach that mentored young guys on our team and helped take the program to the next level."

As a player, Binnie maintained a career 2.56 goals-against average and ranks second all-time among Flames goalies in minutes played (4,116). He was the starting goalie in Liberty's stunning upset of Penn State in the 2008 ACHA DII National Championships, ending its run of 10 consecutive finals. He made the All-ACHA DI Tournament first team and earned ACHA DI All-American and team MVP honors in 2008, when the Flames rose to a No. 4 national ranking in their second season at the DI level.

"We had a good team with a lot of good players, which helps," said Binnie, who platooned in goal with 2005 ACHA DII first-team All-American Dalton Stoltz. "He pushed me to improve and taught me a lot about how to support your teammates because he supported me."

Originally from Ontario, Canada, Binnie expanded his horizons during his Liberty career and after graduating, traveling with the Flames on sports outreach trips to Sweden in 2007 and Latvia in 2013.

"I love to travel and those hockey mission trips were a highlight for me, because it was a combination of my faith and hockey, which I still love," Binnie said. "Going on those trips as a player and a coach were some of the best memories I have from being at Liberty."

Between those overseas ventures, Binnie spent half a season playing professionally for a third-division team in Russia in 2009 before it folded. That led him to return to Lynchburg, Va., to coach goalies at Liberty and in the Lynchburg Youth Hockey League after previously serving in a similar role at Hockey Ministries International's Teen Ranch Canada.

Binnie went on to work with Ryan McEvoy, a former Flames teammate, at a company that services electronics in New York City, and was recently hired by former Flames Football player Brandon Apon, now general manager of a Rick Hendrick Automotive dealership in Buford, Ga., serving alongside several other Liberty alumni.

"It's a good environment, a good culture, and I am very glad to be here," Binnie said.

Looking back at his career path, he said he learned all that he needed to know about running a successful business in the Liberty hockey locker room.

"I often find myself thinking not so much about the games, but the people I have known and met through playing hockey, guys at Liberty who made it fun," Binnie said. "Collectively, as a team, we kind of grew up together through some adversity and in closed-door meetings with coaches, our character came through."