Flames prepared to wrestle from behind at Virginia Duals 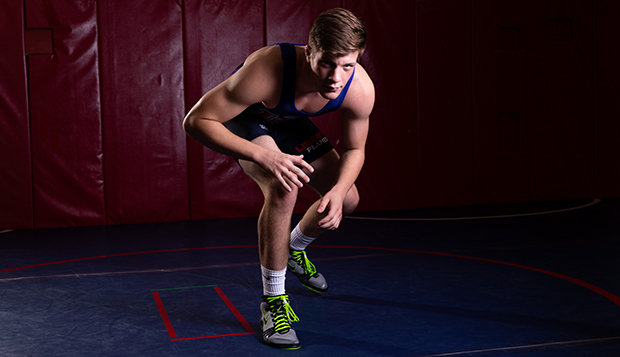 Liberty University's men's wrestling team will have to overcome an early deficit in each of its matches in Friday's and Saturday's 39th annual Virginia Duals at the Hampton Coliseum, competing without wrestlers in the two lowest weight classes.

"We're ready mentally to weather the storm of not having a 125- or a 133-pounder," Flames Head Coach Jesse Castro said. Liberty also competed in the Dec. 29-30 Citrus Invitational without a complete team. "It is different wrestling in a tournament as opposed to a dual meet, where all of those points are accumulative. Forfeiting 20 percent of our matches will put us in a huge deficit. It all depends on the matchups and the level of the teams we are wrestling. We will have to work hard for bonus points — for pins, major decisions, and technical falls."

Liberty's wrestlers returned to campus over the weekend and held their first practice Sunday night before having two-a-day workouts starting Monday to recondition after Christmas break.

The Flames, who finished runner-up to King (Tenn.) University at last year's event, are one of only two NCWA schools in this weekend's eight-team American Division bracket, along with Mid-Atlantic Conference (MAC) rival Apprentice. The Builders maintained the top billing in the latest NCWA rankings, though Liberty, which edged them in last year's MAC tournament and the NCWA Grand Nationals in dramatic fashion, has closed the gap from the preseason poll.

The Flames will hope to build momentum as their matches unfold, starting with freshman Charlie Hudson at 141 pounds and sophomore Chad Cantrell at 149, followed by juniors Andrew Burgette at 157, Luke Ely at 165, and Sam Karel who will platoon with senior Cody Richmond at 174.

Liberty's three captains compete in the final four weight classes — seniors Josh McIlhenny at 184, Austin Amos at 197, and Dominick Johnson at 285. Amos will be backed up at 197 by freshman Josiah Murphy while sophomore Jeffrey Allen and graduate David Smith will alternate with Johnson at heavyweight. If the Flames face fellow NCWA foe Apprentice, Allen and Smith will platoon at 235 pounds, a weight class not contested by NCAA programs.

The Flames hope to have graduate 125-pounder Jeff Lester and freshman Bobby Leak back and expect to have two additional lightweights on their roster before they travel to the Jan. 20 Builder Open in Virginia Beach and to Las Vegas to defend their NCWA National Duals Championship on Jan. 25-26.

L.J. White, a 125-pound freshman who was Allen's teammate at nearby Amherst High School before spending the fall semester with the National Guard, and Lukas Araujo, a 133-pound freshman from Maryland, are planning to join the team.