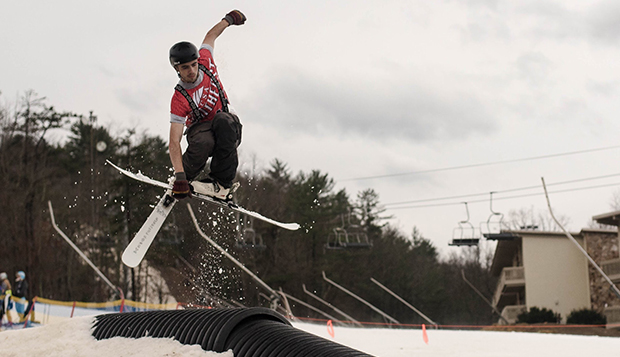 When Liberty University's ski & snowboard team makes its season debut Jan. 12-13 with a slopestyle competition at Appalachian (N.C.) Mountain, it will bring its most balanced team in recent seasons, with six men's skiers, six men's snowboarders, and three women's skiers on its 15-member travel roster.

Isaac Shepard, who took last year off to work on video projects and ski in open competitions, returns for his senior season on the men's ski team, joining sophomore Cole Loomis and junior Jeff Loftus, who are both returning from lower-body injuries, as well as junior Chris Yablonski and senior Andrew Garofalo.

"All those guys are so close in skill level; they're going to be pushing each other to do well and to compete really hard," Flames Head Coach Isaac Gibson said. "Our second- and third-place (performers) could vary from competition to competition. They have a very good, competitive spirit and they will be able to feed off each other in a healthy way."

Garrett Long, who placed fifth individually, returns for his senior season to lead the snowboard team. The Flames also feature sophomores Milo Rice and Payton Fedako, who competed with his arm in a sling at times last season.

"We potentially have a pretty strong snowboard team as well," Gibson said. "They might be pretty evenly stacked. We are excited to see how they perform on snow going up against all the other schools in our region and we have high hopes for nationals."

Senior Kylie Kehrman and freshmen Hannah Loftus and Taylor Keeran form the first full women's ski team in program history with potential to place individually and as a trio at nationals.

Sophomore Morgan Peterson, who returned from an upper-body injury sustained in her first season of competition, and freshman Chelsea Picariello form the Lady Flames' developmental snowboard team and will travel to train with the team.

"She is seeing lots of progression because she just started last winter," Gibson said.

He said having an on-campus training center gives the Flames and Lady Flames an advantage over their Southeast Region competition.

"There is a lot of progression taking place here at Snowflex, which is an incredible resource for us to be out learning tricks on outside of the winter snow season," Gibson said.

Team members visited Wintergreen (Va.) Resort after the mid-December snowfall and are practicing on their home slopes over the Christmas break in preparation for the season opener. They will travel as a team to Big Boulder (Pa.) or Seven Springs (Pa.) and possibly Snowshoe (W.Va.) in February and early March to get used to rails and jumps more similar to what they will compete on at the March 10-16 national championships hosted by Snow King Mountain in Jackson Hole, Wyo.