Flames to wrestle against NCAA DII, DIII teams in Florida 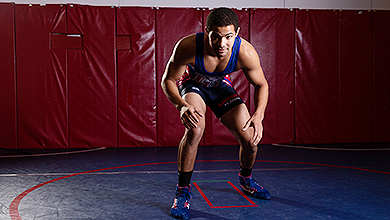 Andrew Burgette, who is 13-2 at 157 pounds, will be one of the Flames' top wrestlers in Florida. (Photo by Nathan Spencer)

"It's one of our tougher tournaments, along with the (Nov. 17) Lindenwood Open in St. Louis," Castro said.

For the first time, the tournament will feature an NCAA Division I bracket and a separate 16-team bracket that will include Augsburg (Minn.), the No. 1-ranked team in NCAA Division III, and other NCAA DII and DIII teams, competing on adjacent mats.

"Last year, Florida Gulf Coast and Florida were in the tournament, but this year, we may be the only NCWA team there," Castro said. "Traditionally, our guys have struggled at this tournament, having been off for a week and a half and not controlling what they eat. But if we didn't do this, they would have another week off, which is usually not a good thing. It will be good to get out of the cold and into some Florida weather and, at the same time, see some good competition. It will serve the program well."

Some of Liberty's top wrestlers competing this weekend will be senior captain Austin Amos (15-2 at 197 pounds), sophomore Chad Cantrell (who is 6-1 at 149 since returning from a rib injury), junior Andrew Burgette (13-2 at 157), and sophomore transfer Jeffrey Allen (13-4 at heavyweight).

Senior captain and heavyweight Dominick Johnson will not be making the trip as he is spending his Christmas break at home in Washington State.

The wrestlers will train on Thursday before the tournament and spend New Year's Eve day at the beach before catching a 7 p.m. flight back to Raleigh, N.C., and arriving by team bus back in Lynchburg around midnight.