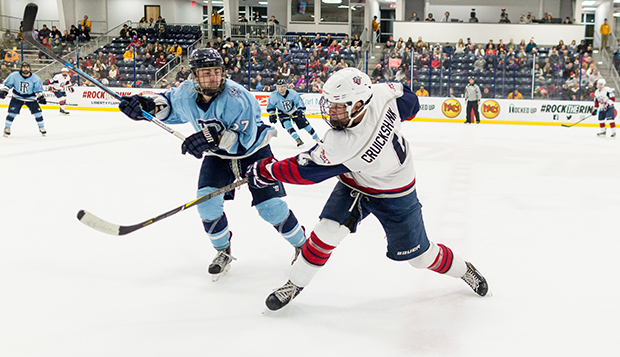 Liberty University's ACHA Division I men's hockey team overcame an early 1-0 deficit to pad its lead in the ESCHL standings with a 4-2 triumph over Rhode Island, Friday night at the LaHaye Ice Center.

For the Flames, winners of six games in a row, it was their 10th win without a loss in their all-time series against the Rams — dating back to a sweep in 2006, Liberty's first season at the Division I level and the year after Rhode Island won its only ACHA DI national title in 2005.

"Rhode Island's a solid opponent that comes ready to play every night," Liberty Head Coach Kirk Handy said. "They're always tight games against Rhode Island. Hats off to them. Those guys worked hard tonight. The big thing for us is we found a way to win and to keep moving forward."

Rhode Island capitalized on a quick odd-man rush after a steal by defenseman Nicholas Kopsick and assist to forward Jake Salisbury, who skated through the slot and finished with a second effort through the five hole of Flames senior goalie Cole Burack for a 1-0 advantage with 16:08 left in the first period.

Liberty responded to tie the game in the closing 1:31 when sophomore forward Jordan Bochinski skated the puck from left to right across the high slot and fired a wrist shot from the inside edge of the right circle through traffic and past Rams goalie JT Ketzenberger.

Midway through the second period, the Flames seized a 2-1 lead when senior forward Zak Hayes dove near the red line to force a turnover and deflect the puck right to sophomore forward Ryan Cox, who skated through the right circle before sliding the puck past the low glove of Ketzenberger.

"Cox had a big night," Handy said. "He's been a consistent player for us. He works hard and it was nice to see him get rewarded."

With 13:51 to go in the third period, Cox sent the puck from the backboards to junior defenseman Josh Bergen who trapped the pass and rocketed a wrist shot through traffic top shelf, stretching the Flames' advantage to 3-1.

"A couple lucky bounces and things went our way," Cox said. "It was definitely a lot of hard work from my linemates, Hayes and (junior forward Josh) Hamilton. They both worked really hard and made it easy on me. It was a good shot by Bergen."

Rhode Island trimmed Liberty's lead to 3-2 in the final 2:19 when forward Patrick Creamer's shot went under the right side of the cage, which was lifted off its moorings, and bounced out to forward Jonathan Alsfeld, who put the rebound back in from the left crease.

With 19 seconds remaining in regulation, junior forward Quinn Ryan put the finishing touches on the Flames' victory with an empty-net power play goal off Cox's second assist of the night.

"I'd like to see us shoot the puck a little more (Saturday)," Handy said. "We need to play a stronger game. (Saturday) is the biggest game of the semester and we've got to make sure we are ready to go."

Saturday's rematch was moved up to 4 p.m. back at the LaHaye Ice Center due to expected snowfall this weekend. It will again be webcast live on LFSN and carried by ESPN+ 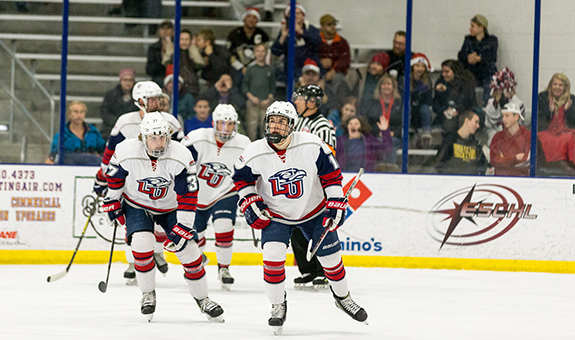