No. 7 Flames host No. 23 Rhode Island in final series of fall 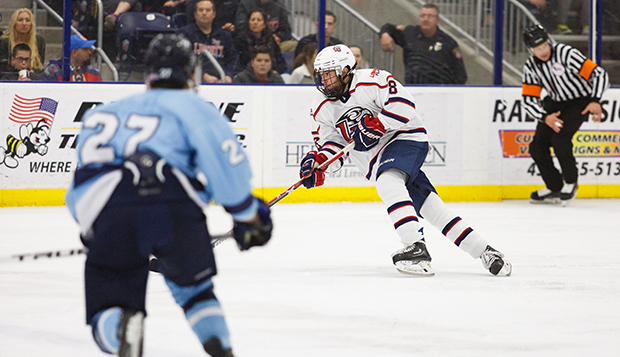 Flames forward and captain Josh Hamilton skates toward the Rhode Island net in the teams' Feb. 17, 2017 meeting at the LaHaye Ice Center. (Photo by Caroline Cummings)

Liberty University's ACHA Division I men's hockey team will entertain ESCHL rival Rhode Island in the final series of the fall semester, Friday and Saturday at the LaHaye Ice Center. (Due to impending snowfall this weekend, Saturday's game time has been moved up from 7 p.m. to 4 p.m.)

"We know we'll have to be ready to go and to play at a high level," Flames Head Coach Kirk Handy said. "Our focus is all about executing our game and taking another step forward in our season."

Winners of five in a row, Liberty moved up one spot to No. 7 in this week's ACHA DI rankings. It is targeting an ESCHL regular-season and tournament title defense March 15-17 in West Chester, Pa., and a top-five ranking by the time the ACHA DI National Championships are held near Dallas, March 21-26.

"We're going to keep pushing," Handy said. "Our next game is always our biggest game and our focus is on Rhode Island this weekend and being the best we can be."

The first 500 fans to Friday night's opener will receive free Santa hats with Liberty wordmarks. Saturday's game is employee appreciation night for Liberty faculty and staff, who can pick up as many as six complimentary tickets from the LaHaye Ice Center front desk through Thursday. Former DI men's hockey goalie Mike Binnie, DI women's hockey forward Stacey McCombe, and paintball coach Todd Hoglund, the three newest members of the Club Sports Hall of Fame who will be inducted on Saturday afternoon, will be introduced between periods.

All-Time Series: Liberty leads 9-0, including a 3-1 semifinal triumph in the 2016-17 ESCHL Tournament played in Kingston, R.I., Liberty's first year in the league.

Liberty scouting report: The Flames are 9-1-1 at home this season, having outscored opponents by a three-to-one margin (54-18), led by its top line of junior forwards Quinn Ryan (17 goals, 20 assists) and Brock Thompson (12G, 9A) and sophomore forward Cole Gammer (12G, 20A). Ryan and Gammer moved ahead of junior defenseman Garrett Nelson (19A) in assists after Nelson was sidelined by injury in the second game of last weekend's sweep at Syracuse.

Coaches: Handy is in his 19th season as Liberty's head coach and has compiled an overall record of 420-175-27. Rhode Island is coached by Joe Augustine, the only coach in the ESCHL with a longer tenure than Handy. He has amassed a 629-300-63 mark in his 30th season at the helm.