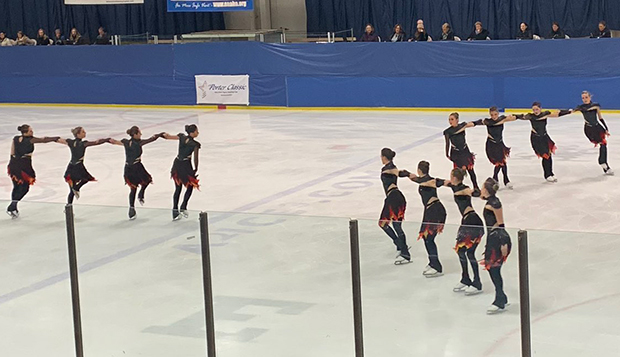 "The girls skated really well and we are very pleased with our skate," Lady Flames Head Coach Tatiana Payne said.

The Lady Flames earned a score of 50.39 points from the International Judging System (IJS) judges.

"Overall, it was a really positive experience," Payne said. "The Dr. Porter Classic is kind of like a pre-national event, one of the biggest competitions for synchronized skating in the country."

Liberty expects to see a lot of the same teams at U.S. Collegiate Nationals set for March 1-2 in Plymouth, Mich.

As one of only two East Coast representatives in the nine-school Collegiate field, the Lady Flames finished eighth, ahead of first-year program Notre Dame. Miami (Ohio) University won the competition with a score of 97.52 followed by Adrian, Michigan, Delaware, Michigan State, Western Michigan, and Illinois, which edged Liberty for seventh place by 1.61 points.

"At the last competition, the Kalamazoo Kickoff, Illinois had beaten us by nine points," Payne said. "We are consistently seeing our components scores go up."

Assistant Coach Emily Halvorson said she and Payne adjusted the program slightly and the skaters were able to score better by having more of their technical components called by the judges.

"We showed a lot of improvement and got more elements called higher technically," she said. "We are still evaluating our girls' skill levels and looking at revamping the program and making some tweaks on our twizzles and moves in the field."

Payne said the 12-skater program, set to soundtracks from the "Hunger Games" movies, has been very well received wherever the Lady Flames have performed.

Liberty is already guaranteed a qualifying spot at nationals as long as it competes as one of the five schools at the Feb. 1-2 Eastern Sectionals in Worchester, Mass., along with UMass, Amherst, Boston, and the Massachusetts-based Team Excel, a high-caliber group made up of skaters from multiple schools.

Payne wants to see the Lady Flames continue to raise the bar for the program.

"We've just got to put in our dues, essentially," Payne said. "We are trying to get in front of more judges and build a level of respect for our team. Judges are now starting to look forward to seeing us and that is reflected in the performance scores they're giving us."