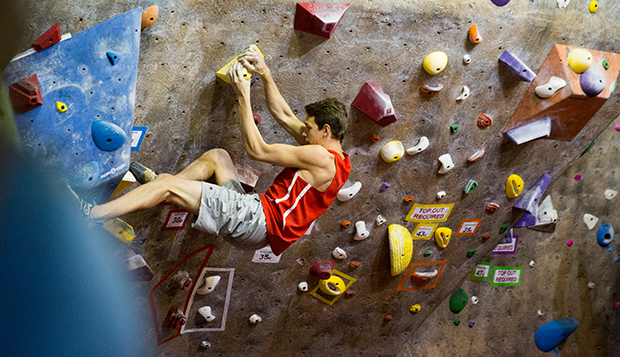 Liberty University's rock climbing teams competed in two Collegiate Climbing Series bouldering events this fall and plans to travel to three more and host one in the spring semester before sending as many as three men and three women to the April 27-28 USA Climbing Collegiate National Championships in Murfreesboro, Tenn.

"Typically, the spring season is more of a route season and the fall is typically a bouldering season," Liberty Head Coach Elliot Gaunt said. "Route climbing requires a little more technical skill and pure endurance than bouldering, which is more about power. At nationals, we will probably have a couple entered in bouldering and a couple do sport climbing."

The Flames and Lady Flames combined to win the Golden Shoe award at River Rock Climbing in Roanoke on Nov. 2, topping men's and women's teams from the University of Virginia and Maryland.

Team scores were based on the totals of the top five men's or women's scores, with points awarded for each climber's top five of up to 50 bouldering problems completed in a three-hour period.

On Oct. 13 at Crimper's Climbing in Christiansburg, Liberty had the highest men's and women's place-winners in a four-team competition featuring JMU, William & Mary, and host Virginia Tech.

Brower paced the men with his fourth-place total of 14,400 followed by Ellis and Nichols, who tied for sixth with 13,100 points, Zerkle (who also accumulated 13,100 points but placed eighth in a tie-breaker since he had more falls), and Anderson (ninth, 13,000).

After Christmas break, Liberty will travel to Western Carolina on Feb. 16, Brevard Rock Gym in Brevard, N.C., on Feb. 23, and Gravity Vault near Philadelphia on March 2 before hosting a Route Rally at the LaHaye Recreation & Fitness Center rock wall on March 29.