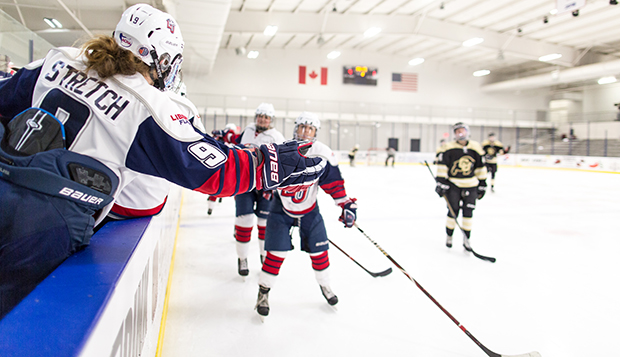 Freshman forward Aislyn Stretch reaches out to congratulate her teammates after a goal. (Photo by Joel Isimeme)

"We finished on a high note," Lady Flames Head Coach Chris Lowes said. "The girls were firing on all cylinders. Overall, it was a good win, a good road trip, and a really good way to wrap up the semester. We'll be excited to get it going again in the spring."

The Lady Flames (17-1-2, ranked second in the nation) overpowered the Panthers for the second time in three weeks — after a dominating 13-0 home win on Nov. 13 — and finished 3-0 over the weekend after sweeping Grand Valley on Friday and Saturday. (Liberty went 1-1-1 on its first road trip to the Wolverine State, routing Michigan on Oct. 25 before suffering its first loss to No. 1 Adrian on Oct. 26 and tying the Bulldogs in the Oct. 27 rematch. The Lady Flames have won nine in a row since then).

On Sunday, Liberty outshot the Panthers 23-4 in the first period and opened a 2-0 lead on goals by junior defenseman and alternate captain Dana McLeod and sophomore forward Danica Polson, who capitalized on a power play.

"We ran a deep bench and really jumbled our lines a bit there so lots of people got touches," Lowes said. "This was our third game of the weekend and we still had lots of energy left so I like where our conditioning is at as a team."

The Lady Flames outshot Davenport 57-8 for the contest and freshman goalie Madeleine Snook made seven saves before allowing the Panthers' only goal on a two-on-zero break with 17 seconds left in the third.

"It was good to get Maddie Snook her first start and her first win," Lowes said.

Liberty will open its spring semester schedule Jan. 11-12 against Massachusetts at the LaHaye Ice Center. The Lady Flames will also challenge 2014, 2016, and 2017 ACHA DI national champion Miami (at Ohio on Jan. 18-19) and last year's national runner-up Adrian (Feb. 15-16 at home) in preparation for defending their crown, March 27-31 near Dallas.