Lady Flames sweep Lakers on their home ice; Panthers next 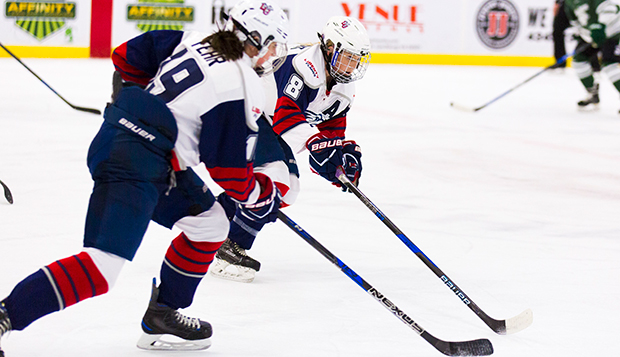 "It was a pretty sick goal," Lady Flames Assistant Coach Leah Carlson said of Bradford's unassisted effort. "She pulled (the puck) through an opponent's feet and fell over and slid on her stomach as she scored."

Bradford was one of six different scorers as Liberty (16-1-2, ranked second in ACHA DI) showcased its depth with a decisive sweep of the No. 8 Lakers at Georgetown Ice Center in Hudsonville, Mich.

"(DeMerchant) did a good job leading the team today," Carlson said. "We were proud of all of the girls. It was a whole team effort. They came prepared and ready to play."

Fehr opened the third period by putting away a pass from Machholz before Bradford slid home the final score.

Liberty will conclude its second three-game Michigan road trip season and wrap up its fall semester schedule at Davenport, Sunday at 10:30 a.m. The Lady Flames routed the Panthers, 13-0 on Nov. 13, in the final game of a four-game weekend showcase at Liberty, but aren't looking past them.

"Our most important game is the next game," Carlson said. "We're excited about this first half of the season. The girls have done a really good job and I'm proud of the way they're handing themselves as student-athletes. We're done after tomorrow with finals all next week and the girls are going to benefit from the break, healing up their bodies before getting back to work after Christmas."