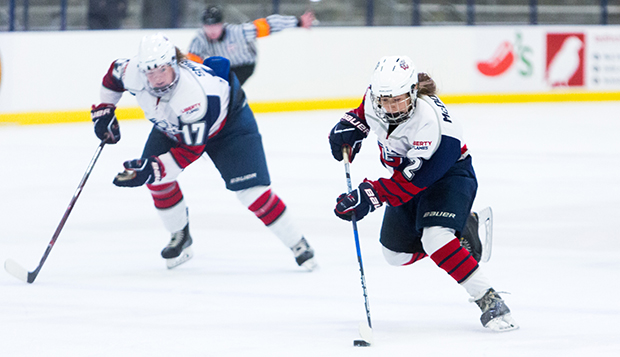 "That was one of Nadia's best performances of the year," Liberty Head Coach Chris Lowes said. "I am glad we put everything together because that's a good team, a national tournament team. They've had some big wins, they have a strong goalie and some dangerous players."

The Lady Flames killed off Grand Valley State two power plays in the first period and took a 1-0 lead on Smibert's first goal with 2:01 to go, assisted by senior forward Lauren McDonald.

Grand Valley State scored its lone goal in the second period, when leading scorer Allison Carlson beat Rupoli on a breakaway. But Smibert completed her hat trick off assists from McDonald and sophomore defenseman Kristi Serafin, and then from McDonald and junior defenseman Dana McLeod.

"She had a great game, one of those games when Alex did what Alex does," Lowes. Smibert scored all three of her goals with the teams at even strength. "When Smibert breaks out, she is such a weapon."

"The thing I like about our team offensively is we have such a deep stable of offensive threats, from different lines at different times," Lowes said. "That is the biggest difference in our team this year and it is super encouraging."

The Lady Flames and Lakers will meet again on Saturday at 5 p.m. before Liberty travels to No. 14 Davenport for a 10:30 a.m. showdown on Sunday.