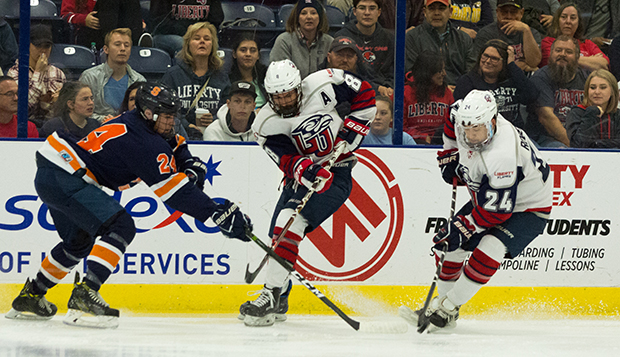 Junior forward and captain Josh Hamilton works the puck along the boards in the Flames' loss to Syracuse on Oct. 13 at the LaHaye Ice Center. (Photo by Gabrielle Calhoun)

Syracuse dealt the defending ESCHL regular-season and tournament champion Flames their only blemish in conference play this season, a 5-4 overtime setback Oct. 12 at the LaHaye Ice Center.

"We are focused on the task at hand," Liberty Head Coach Kirk Handy said. "We split with them here and we realize they are a strong opponent and we are going to have to be ready to play at the top of our game. It's a big weekend for us and a good opportunity for us to go up there to take another step forward in conference play."

It will be Liberty's second time traveling to New York in three weeks after senior goalie Cole Burack shut out New York University in back-to-back games in Manhattan on Nov. 16-17. The Flames remained at No. 8 in last week's ACHA Division I rankings.

All-time series: The Flames and Orange are 2-2 in ACHA Division I matchups, having split their only two series at Liberty, in October 2017 and last month.

Liberty scouting report: The Flames are back to near full strength with the return of junior defenseman Garrett Nelson, Liberty's leader with 18 assists who missed the series at NYU.

"Crane has moved up to forward after he did a good job there the second game at NYU," Handy said. "We're happy with the way the lines played up there. Our guys are working hard and are progressing."

Liberty's attack is ignited by junior forward Quinn Ryan (15 goals, 17 assists), who scored four goals in the second game on Oct. 13 to help the Flames salvage a split with Syracuse, sophomore forward Cole Gammer (12G, 15A), and junior forward Brock Thompson (9G, 8A).

Syracuse scouting report: The Orange, whose only other ESCHL loss came against Stony Brook, gave No. 3, defending ACHA DI national champion Adrian its closest contest of the season in a 5-4 home loss on Nov. 10. Syracuse's offense is sparked by junior forward Peter Owen Hayward (13G, 7A), who paced ACHA Division I in scoring as a freshman (38G, 26A) and led Syracuse with 40 points last season. He is complemented by Connor McNamara (11G, 3A), Ford Hatchett (13A), and Trip Franzese (4G, 6A).

Coaches: Kirk Handy is in his 19th season as Liberty's head coach and has compiled an overall record of 418-175-27. Connor Treacy is in his first year as Syracuse's head coach after serving as an assistant the previous two seasons.