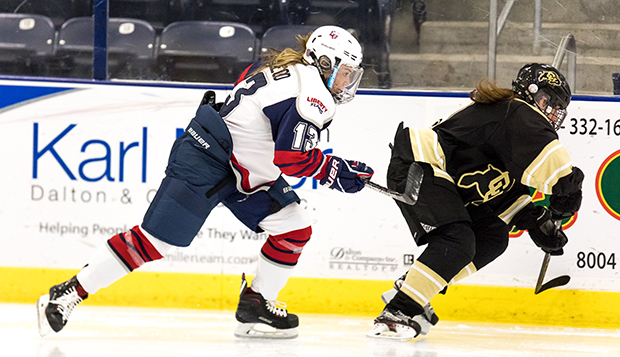 Junior defenseman Dana McLeod skates against Colorado in the first game of the Liberty Showcase at the LaHaye Ice Center. (Photos by Joel Isimeme)

A day after outshooting Davenport by an 85-20 margin in a 13-0 shutout win, Liberty University's ACHA Division I women's hockey team put 79 shots on Penn State goalie Christina Bober in a 13-1 win Sunday afternoon at the LaHaye Ice Center.

Sophomore forward Danica Polson capped the first-period scoring off an assist from senior forward Lauren McDonald for a 3-0 lead with 4:13 to go.

Fehr tallied her first score with 18:34 left in the second period before junior defenseman Dana McLeod scored unassisted and then assisted a goal by sophomore forward Shelby Bradford with a shot from the point three minutes later, stretching Liberty's lead to 6-0 at the midpoint of the contest.

Machholz then added her second goal off an assist from junior forward Tiana Lisle from the right side.

Penn State ended Lady Flames junior goalie Nadia Rupoli's shutout bid with 3:24 left in the second on a power-play goal by Mikaela Poorman in the slot. Fehr responded to complete her hat trick 20 seconds later on a shot from the right circle.

Freshman goalie Madeleine Snook gave Rupoli her first break of the weekend to start the third period, but only had to make two saves in 20 minutes.

Graduate defenseman C.J. Tipping started the third period scoring off a faceoff win in PSU's left circle before McDonald showcased her speed, slicing through the slot and crashing toward the cage as she deposited the puck into the left side of the net.

Morris cleaned up a wraparound attempt by Machholz from the right side by sticking the loose puck inside the left post for her second goal before junior forward Mackenzie Carroll got her first on a putback of a shot by Lisle in the slot with 8:15 to play.

Sophomore defenseman Sydney Pierce, who distributed four assists on the day, put the finishing touches on the 12-goal triumph by punching in a rebound of a point-blank shot by Carroll with 1:14 remaining in regulation.

After a well-earned Thanksgiving break, the Lady Flames will travel to Michigan to play two games at 10th-ranked Grand Valley State on Nov. 30 and Dec. 1 and one at Davenport on Dec. 2. 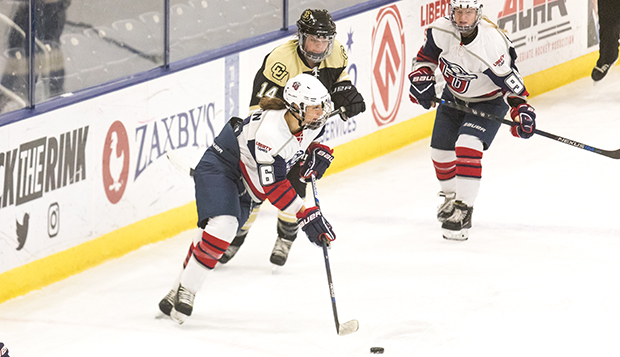