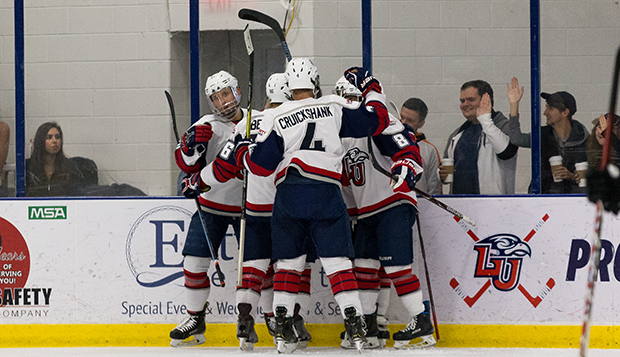 Junior defenseman Matt Cruickshank celebrates with his teammates during the Flames' opener against NYU on Oct. 19. (Photo by Gabrielle Calhoun)

A five-minute major assessed to New York University's goalie for crosschecking late in the first period opened the game for Liberty University's ACHA Division I men's hockey team, Saturday night at Sky Rink at Chelsea Piers in Manhattan. Already ahead by a pair, the Flames tacked on two goals in the final two minutes to take a commanding 4-0 lead into the first intermission en route to their third consecutive 5-0 victory over the Violets, dating back to Oct. 20 at home.

"The big story for us were the three power-play goals and the fact that we were 100 percent on the PK," Liberty Head Coach Kirk Handy said of the Flames' penalty kill. "Any time you can do that, it's a recipe for success."

Liberty played with a short bench as it was missing forwards Zechariah Roberts and Sam Carlson and defenseman Garrett Nelson, leaving it with a roster of 19 active players.

"We were able to get the job done with other guys stepping up," Handy said. "I was proud of our guys, and thought we played well."

The Flames outshot the Violets, 37-22 on the night.

"NYU is a tough place to play and our guys took care of their own end," Handy said. "Now, we are going into Thanksgiving break with two big conference wins, which is what we came up here to do."

The penalty against NYU goalie Patrick Cavanaugh gave the Flames a five-on-three for the final 2:54 of the first period and Pierce finished a feed from senior forward Zak Hayes with 1:31 left before Ryan scored an unassisted goal to close out the stanza.

Junior defenseman Josh Bergen capped the Flames' scoring off assists from captains Hayes and Josh Hamilton in the third period.

Liberty will return to action with a Dec. 1-2 ESCHL clash at Syracuse, which dealt Liberty its only conference defeat in overtime on Oct. 12.