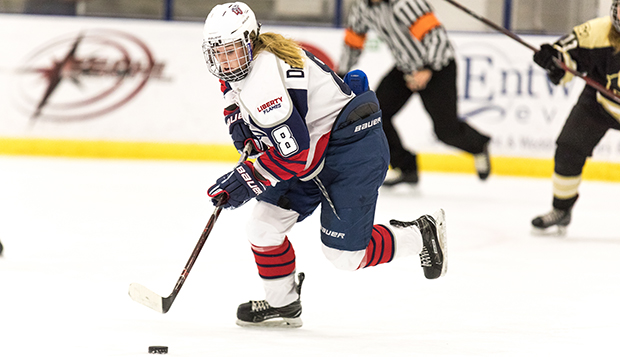 Sophomore forward Shannon Fehr, who scored two of Liberty's final three goals in a 4-3 comeback win over Colorado early in the afternoon, netted a hat trick against the Panthers, needing less than five minutes to put the Lady Flames on top with an unassisted score.

With seven seconds left on a power play, DeMerchant sent a pass from the left point onto the stick of McDonald cutting into the right crease where she perfectly deflected the puck into the top right corner of the cage, increasing the Lady Flames' lead to 3-0 at the 3:28 mark.

Less than a minute later, junior forward Tiana Lisle skated through the left circle and sent a low, sharp-angled shot that glanced through the pads of Panthers goalie Julia Gaynor into the back of the net, expanding Liberty's advantage to 4-0 with 2:46 left in the first period.

Fehr stretched Liberty's edge to 5-0 just under seven minutes into the second, lifting a point-blank shot past Gaynor top shelf with the Lady Flames on the power play. Senior forward Lauren McDonald started a three-on-two break and assisted junior forward Aly Morris for an easy score in front, making it 6-0 at the 11:44 mark. Morris struck again with a shot through the five hole from the left crease three minutes later, stretching Liberty's lead to 7-0, before Lisle's point-blank putaway made it 8-0 with 8:01 to go and freshman forward Alexis Paulmert tacked on a ninth goal with 3:57 left in the stanza.

Danica Polson converted fellow sophomore forward Shelby Bradford's pass from behind the right post into the Lady Flames' 10th goal with an open-net finish in front at the 18:38 mark before Carroll tipped in sophomore defenseman Sydney Pierce's shot from the right boards 10 seconds later off the ensuing faceoff to enlarge Liberty's lead to 11-0.

Fehr completed her hat trick by picking up a loose puck in the right circle and launching a wrist shot into the top left corner, widening the gap to 12-0 with 7:44 remaining in regulation. Gibson capitalized on a crossing pass from Morris for the Lady Flames' final score at the 4:13 mark.

The Panthers (1-9) were outshot, 85-20, and Liberty junior goalie Nadia Rupoli made 20 saves to post her third shutout.

The Lady Flames (13-1-2) will conclude their four-game weekend showcase with a Sunday showdown with Penn State at 1:30 p.m.