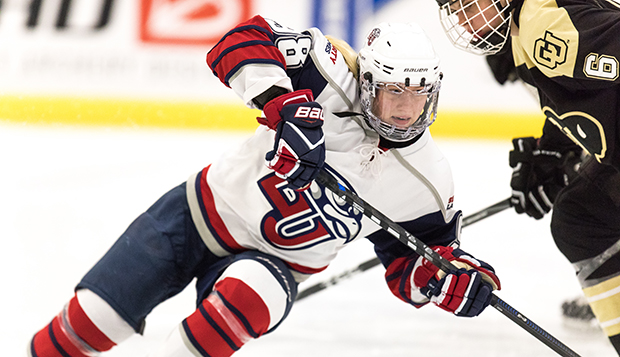 The Lady Flames (12-1-2) racked up five goals in the second period of Friday's opener to break open a 7-1 lead before holding off the Buffaloes, 7-4. Then, just over 12 hours later, Liberty scored three goals in a span of four and a half minutes late in the third period to emerge with a 4-3 victory.

"It was probably one of the games with the most momentum swings that we've been in this year," Lady Flames Head Coach Lowes said. "It was a really fun game to be a part of, a super physical game. They're a tough team and we had to show some resiliency and some desire there, which was good to see."

Colorado (11-4) features the top three scorers in ACHA Division I — center Leah MacArthur (22 goals, 14 assists), who scored all four of the Buffaloes goals on Friday night, and forwards Moriah Dalley (13G, 22A) and Kathleen Ash (20G, 6A).

Liberty struck first just over a minute after the opening faceoff on Saturday when freshman forward Grace Machholz jammed a loose puck past Colorado goalie Lexi Hartmann. But the Buffaloes capitalized on a power play goal by Mariah Dalley with 8:37 left in the first period.

The Buffaloes seized their first lead with 11 seconds left when Kathleen Ash lifted a rebound over Lady Flames junior goalie Nadia Rupoli to take a 2-1 edge into the third period.

With 9:36 remaining in regulation, Lady Flames sophomore forward Shannon Fehr received a pass from graduate defenseman C.J. Tipping at the top of the left circle and fired the equalizer through a screen set by junior forward Deena Birney in front of Hartmann into the right side of the net.

Less than a minute later, Liberty sophomore defenseman Sydney Pierce bounced a clearing pass out of the left corner off the left boards up to sophomore forward Danica Polson, who skated through the left circle and rocket a shot past Hartmann into the top left corner.

Colorado responded 30 seconds into a power play when Sarah McNamara took the puck out of the right corner and beat Rupoli with a wrist shot top shelf, retying the game at 3-3 with 5:50 to play.

Just 31 seconds later, Pierce started an odd-man rush from around the red line with a pass to sophomore forward Shelby Bradford, who was taken out of the play at the top of the left circle before a trailing Fehr skated the puck into the left crease and threaded her shot between a defenseman and Hartmann into the top right corner for the game-winner.

"It was a really good team victory to come back from being down going into the third," Fehr said. "We really worked together to show what we're made of."

The Lady Flames held a 37-31 edge on the Buffaloes in Friday night's opener but allowed MacArthur to net a natural hat trick over a 12-minute span from late in the second to early in the third period.

"She's a super-talented player," Liberty Assistant Coach Justin Forth said. "If she can get one step on you, she's got you beat and she's going to be dangerous."

Machholz started the scoring for Liberty midway through the first period off an assist from Polson before junior forward Mackenzie Carroll extended the lead to 2-0 just 44 seconds later by finishing feeds from freshman forward Aislyn Stretch and senior forward Lauren McDonald.

MacArthur cut the deficit to 2-1 with an unassisted score with 3:14 left in the first before Liberty netted the next five in a row. That scoring flurry included back-to-back goals by junior defenseman Dana McLeod and Bradford 38 seconds apart five minutes into the second period and scores by Bradford and Birney separated by 21 seconds five minutes later.

"We're a way deeper team and we had some people step up and got some good secondary scoring," Forth said. "It was good to see everybody firing."

Natalie Warnes made 30 saves in net for Colorado while Rupoli stopped 27 shots for the Lady Flames.

Liberty will have seven hours to prepare for its next game, at 8 p.m. against Davenport, before concluding the showcase against Penn State on Sunday at 1:30 p.m. 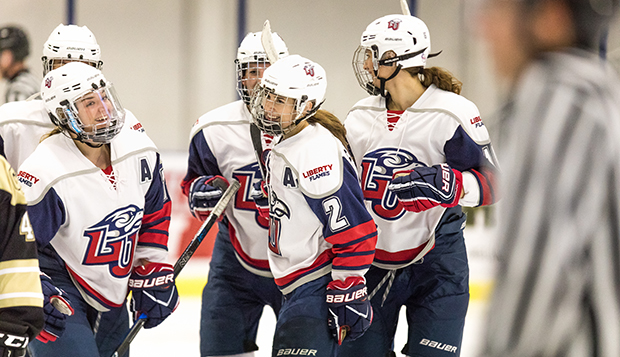 The Lady Flames celebrate one of their seven goals in Friday night's opener.