Schotten will add versatility to Lady Flames' lineup in 2019 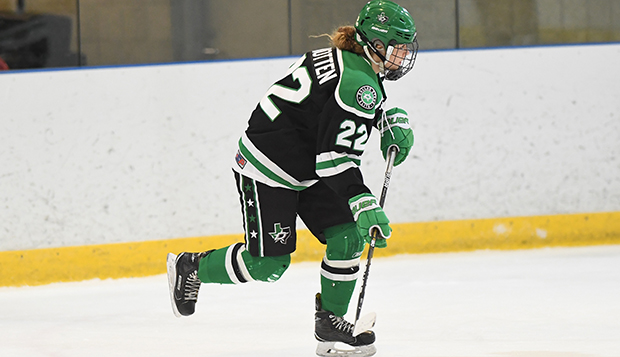 Hannah Schotten is a talented two-way player for the Dallas Stars Elite U19 team. (Submitted photos)

Liberty University's ACHA Division I women's hockey team has landed a second commitment for its 2019-20 recruiting class, Hannah Schotten, a multipurpose player and captain for the Dallas Stars Elite U19 team.

"She can play a little bit of forward and defense," Lady Flames Head Coach Chris Lowes said. "I've seen her play at both positions in person and she has the ability to fill holes depending on what our needs are. She is a good athlete, a good skater, and I think she'll bring a lot of energy."

Schotten visited Liberty with her family twice over the past four months. She participated in the Liberty Christian Hockey School, a camp led by the Lady Flames' DI coaching staff in late June, before returning to campus in October, when she committed to join the team.

"We've watched her a few times and been interested since last year," Lowes said. "She's a great kid, a great fit for our program and our culture as a student-athlete. She'll bring a lot with the faith component and then hopefully one day be a leader here, too."

Playing with the Stars Elite U19 team has prepared Schotten well for the level of play in the ACHA.

"It's a really good league and a good program that produces a lot of college players," Lowes said. "She's played with (and against) a lot of talent and that experience will bode her well."

Schotten recently underwent knee surgery and will be sidelined for the majority of her senior season with the Stars as she goes through rehabilitation.

"That will be a challenge for her, but she is very upbeat and positive," Lowes said. "The surgery went really well and we're excited to see how she comes out in the spring after she's recovered and can get back on the ice."

Although she won't be able to compete for her team this winter, Schotten was voted as a captain and will play an active vocal role on the bench and in the locker room.

"That's a big honor and says a lot about how her coaches and her teammates view her," Lowes said.